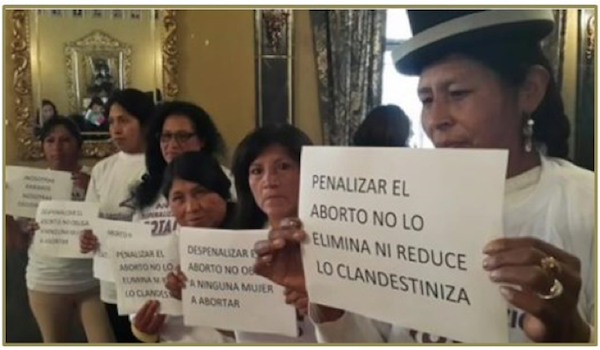 A proposal for reforming the law on abortion is making “a lot of noise” in Bolivia, according to one media source.

The President of the Bolivian Senate, José Alberto González, confirmed to the media on 10 March that the proposals are part of broader reforms to the country’s Penal Code, which are being considered by the Justice Commission of the Chamber of Deputies. While he recognised, he said, that there are views on both sides of the issue, the “scandalously high” number of maternal deaths from clandestine abortions had to be taken into account. The President of the Chamber of Deputies, Gabriela Montaño, pointed out that those from the middle and upper class are able to obtain abortions safely in the best of conditions while those who are poor face the risk of death.

Article 157 in the proposed amendments states that the practice of abortion will not constitute a criminal offence when requested by the woman and in compliance with certain conditions – that abortion can be practised within the first 8 weeks of pregnancy, but once per woman only, and only if the woman is in a situation of extreme poverty and does not have sufficient resources to maintain herself and her family, or if she has three or more children, or if she is a student.

The amendments also state that abortion can take place at any stage of pregnancy if there is a risk to the health or the life of the pregnant woman, or a fetal anomaly incompatible with life is detected. And lastly, abortion of a pregnancy that is the consequence of rape or incest may take place, or if the pregnancy is in a child or an adolescent.

Since 2014, abortion has theoretically been possible in Bolivia but is severely restricted to danger to the woman’s health or life that cannot be resolved other than by abortion, or in cases of incest or rape, which have to be reported to the police. Currently, a woman can be imprisoned for up to three years and the provider up to six years.

Feminist groups point to the balance sheet under the current legislation: According to Ipas Bolivia, fewer than 100 legal abortions have been recorded since 2014, against an estimated 185 illegal abortions per day. Others, such as Somos Sur in Cochabamba, note that 67,000 women are treated in hospital each year for complications of unsafe abortion, and as many as 500-600 die, making unsafe abortion the third leading cause of maternal death in Bolivia.

The debate in Parliament has not yet begun but the debate in public is going strong. Tania Nava, an activist from the group Pacto por la Depenalización del Aborto, is reported in Diario de Salud as saying these proposals are certainly an advance over the current situation, but they do not go far enough. Abortion needs to be removed from the criminal law altogether and become a matter of public health. She also describes the time limit of 8 weeks of pregnancy for abortion on request as far too low, and asks why a woman should be allowed one abortion only. Also, she asks, how is anyone to know if someone has previously had an abortion? These proposals do not acknowledge women’s autonomy.

In a press conference on 22 March, Campaña 28 de Septiembre called for the total decriminalisation of abortion: 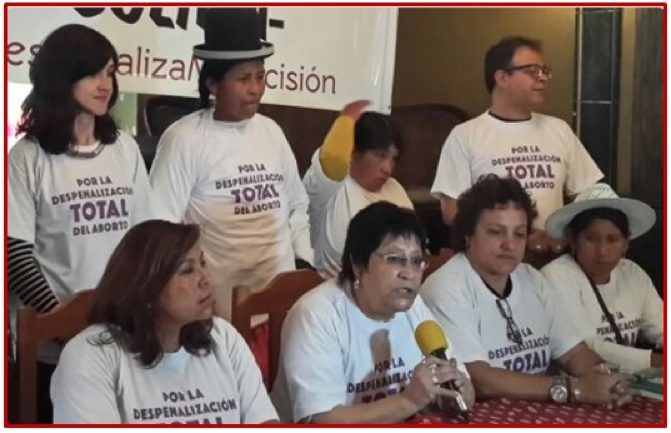 Helen Alvarez, in a radio programme on “Femicide as a patriarchal state crime”, has described deaths by clandestine abortion as a form of mass murder of women, which the State is directly responsible for.

The College of Physicians of Bolivia is against the reforms. Its president says they will claim conscientious objection so as not to have to provide abortions if the reforms are passed. The Episcopal Conference of Bolivia mentioned the Pope’s forgiveness of women who have abortions.

Although Bolivia’s president, Evo Morales, claimed that “any abortion is a crime” in 2013, he also acknowledged that he was not an expert on the topic and expressed his willingness to discuss the subject with female ministers. Now, his own party, Movement for Socialism, is putting the bill forward. Mr. Morales has apparently tried to detach himself from the controversy by saying that he was not involved in drafting the bill, but feminist collective Mujeres Creando have criticised his lack of empathy and commitment to Bolivian women: “He never says a word about the men who practise abortion by abandon the woman they made pregnant”.

Other disagreements with the proposed law by abortion rights groups have been expressed: “They should promote vasectomies but only for poor and irresponsible men” Mujeres Creando told The World Weekly. They call on the Bolivian government to legalise abortion without any restrictions within the eight-week timeframe.

The Bolivian Ombudsman, David Tezanos Pinto, considers this debate necessary for Bolivian society. “As a human rights body,” he said in a statement, “we must stress that economic status should never be a basis for the observance of human rights. The universality of human rights means it is not only poor women but also those who are not poor who should be permitted abortions, thereby recognising the right to reproductive self-determination of all women.”