1. A doctor who zigzags across the US midwest to provide abortionsThis article is about Dr Colleen McNicholas, who each day zig-zags across across a wide swathe of the Midwest of the USA, considered an abortion “desert”, to make sure clinics stay open and women get the abortions they need. On this particular day, as described in the article, she is greeting at the first clinic in the morning by an anti-abortion protestor who says: “Oh, Colleen, you’re here to butcher the babies again, aren’t you?”The article continues: “Once inside the clinic, an armed guard waves her through the metal detector and a set of auto-lock doors (the second won’t open until the first one shuts). She has just enough time to change into scrubs, shove a few bites of a bagel into her mouth (she’ll munch on this one bagel all day in lieu of a lunch break), and wash her hands for the required three minutes before it’s time for the first abortion. By the end of her eight-hour workday, she will have terminated 31 pregnancies.”According to the Guttmacher Institute, in 2011, the most recent year for which data are available, 94% of counties in the midwest had no abortion clinic to serve the 13.2 million women of reproductive age who live there. She works two days every three weeks at the Planned Parenthood in St Louis – the only remaining abortion clinic in Missouri – flies once a month to the Wichita, Kansas clinic where Dr George Tiller practised until he was shot dead in 2009 by an anti-abortion zealot, and in June will begin traveling to Oklahoma City to work at a newly opened clinic there.She also treats patients at her obstetrics and gynecology practice at St. Louis’ Washington University School of Medicine, where she is an attending physician and assistant professor. Then there is testifying before the state legislature and lobbying Washington, .C with other doctors, in opposition to anti-abortion bills.”Good thing you learn how to not sleep in med school, huh?” she says, laughing…SOURCE: Marie Claire, by Kayla Webley, Photo: Rebecca Greenfield, 19 May 2016*** 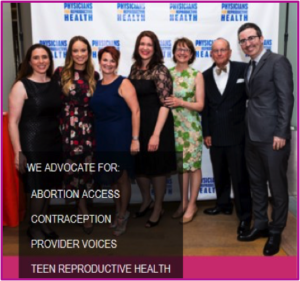 2. Member of Physicians for Reproductive Health prohibited from talking about abortion publiclyIn May 2016, Dr Diane Horvath-Cosper, who was working at MedStar Washington Hospital, which describes itself on the internet as the largest private hospital in Washington DC, filed a complaint with the U.S. Department of Health and Human Services because the hospital prohibited her and other health care providers from speaking publicly and to the media about abortion, apparently due to security concerns.Physicians for Reproductive Health, of which she is a member, expressed concern that she was forced to choose between her job and her conviction to speak out about providing abortion care. They committed themselves to providing her the support she needs to pursue this legal case, particularly in the face of the harassment and intimidation physicians who support abortion face in the country. She has since been accepted as a fellow into the Leadership Training Academy of Physicians for Reproductive Health.The case garnered a great deal of interest, as it raised concerns about employment discrimination based on an institution’s beliefs. The New York Times, and other widely circulated media outlets have picked up the story, including: The Associated Press, Cosmopolitan Magazine, Vice, Slate, Modern Healthcare, Newser, ThinkProgress and Jezebel.Advocacy and leadership training for physiciansPhysicians for Reproductive Health have been helping doctors become advocates since 1992. Their Leadership Training Academy trains physicians to be equipped to speak out for their patient’s health, countering misinformation and stigma, and to feel supported by a network of colleagues around the country. To date they have trained more than 240 physicians from a variety of medical specialties, many of whom provide abortion care.The Academy offers skills-building workshops, hands-on advocacy experiences, and networking opportunities that will provide promising physician leaders with guidance and resources for professional and personal leadership development. The agenda includes first-hand advocacy experience, visits with lawmakers in state capitals and Washington, DC, in-person sessions and webinars, opportunities to improve medical education and share best practices in reproductive and sexual health care with peers, on-camera media trainings, chances to educate the public about abortion, contraception, sexually transmitted infections, and other aspects of sexual and reproductive health, collaboration with physicians around the country and across specialties, opportunities to build and strengthen coalitions between organizations, and guidance from experts in medicine, advocacy, leadership, and communications.SOURCE: Physicians for Reproductive Health, 2 May 2016, and PRH Leadership Training Academy