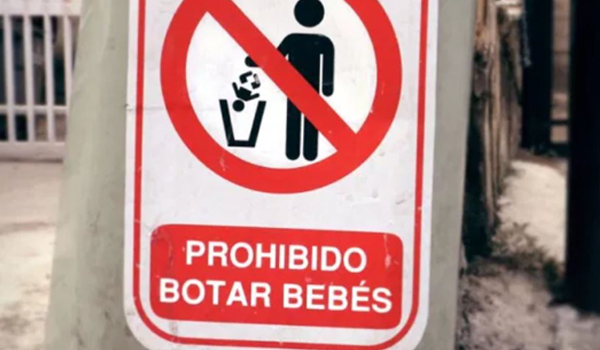 The graphic is straightforward but shocking.

That anyone would conceive the need for such a sign is heart-breaking. That it encapsulates a growing problem in Venezuela, a nation strung taut between political stalemate and economic collapse, is nothing short of devastating.

Venezuelan artist Eric Meiicano told the BBC he created the campaign after a newborn was found in the trash near his Caracas apartment. “Something is becoming common which should never be considered normal,” he said. The BBC report also described a precipitous rise in infants abandoned in the streets or left on the doorsteps of public buildings.

Venezuela’s financial crisis has spurred a huge exodus of 4.5 million people who have fled the country. Left behind are nearly a million children. Many have been put in the care of a neighbour or relative while desperate parents seek a way to send help; others have been abandoned.

From 2015 to 2016 alone, infant mortality rose 30%, while maternal mortality jumped 65%, according to Venezuela’s Health Ministry. Within days of releasing those figures, the Health Minister was fired. After that, no further epidemiological data have been published.

Venezuela has the highest rate of teen pregnancy in Latin America. One in four babies is born to a teenaged mother, according to the UN Population Fund. Thus, often, running from violence, children abandoning children.