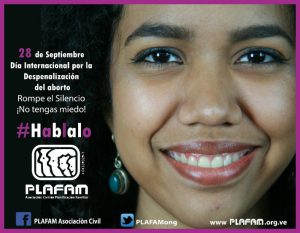 Proyecto Hablalo (Talk It Over), a young people’s voluntary activity with PLAFAM, the IPPF member in Venezuela, held a rally for 28 September in a public space outdoors and encouraged passersby to attend by giving a talk on the importance of safe, legal abortion and contraception, the dangers of the restrictive abortion law in the country and the criminal punishments for abortion that exist in many Latin American countries. Passersby were encouraged to participate in creative activities, artwork, discussions and games, including a competition in which they could win condoms. The day also included public speeches, music and a short film. Participants were encouraged to sign a petition calling for safe abortion. PLAFAM feels it is important to pay particular attention to encouraging adolescents and young people to join in activities, in order to promote an open discussion on abortion and to break the silence and stigma that surrounds abortion in Venezuela.