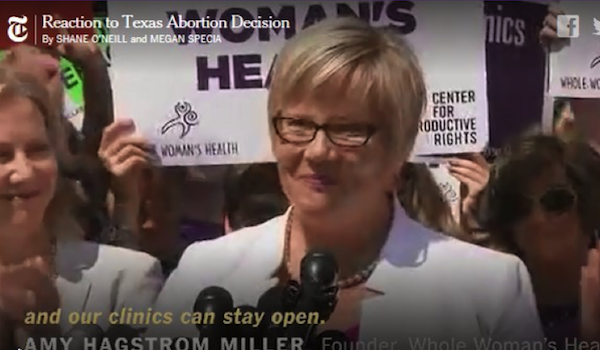 “Every day Whole Woman’s Health treats our patients with compassion, respect and dignity – and today the Supreme Court did the same. We’re thrilled that today justice was served and our clinics can stay open.” – Amy Hagstrom Miller, Founder/CEO, Whole Woman’s Health, Texas, USA

On 27 June 2016, the US Supreme Court handed down its first major ruling on the subject of abortion since 1992, and women won.

It’s good to have a cause for celebration for a change. Make sure to watch this video in the NY Times article of 27 March, filmed outside the Supreme Court just after the decision was announced, from which the above screenshot was taken. It’s almost as good as being there.

The history of this decision, summarised on 28 June by the Center for Reproductive Rights (CRR), goes back to 2013 when the Texas state legislature passed a law requiring freestanding abortion clinics to behave like hospitals in two ways: first, they had to obtain local hospital admitting privileges, a medically unnecessary mandate, and second, every licensed abortion facility was required to meet the same hospital-like building standards as an ambulatory surgical centre, which meant spending millions of dollars on medically unnecessary facility renovations.

In April 2014, CRR filed suit against Texas on behalf of Whole Woman’s Health and several other Texas abortion providers. A federal court blocked the state’s requirements, then an appeal court reinstated them, then the Supreme Court blocked them, and then another appeal court reinstated them, and then the Supreme Court blocked them a second time, pending their hearing of the case. Many of the affected clinics closed, re-opened, closed and re-opened again by mid-2015.

The Texas abortion providers asked the Supreme Court to review the case in September 2015. Following the urging of a diverse group of medical and public health organizations, state attorneys general, and leading legal scholars, the Court accepted the case a month later and in November 2015, agreed to review the law. In preparation for the hearing, according to CRR, “an unprecedented collection of influential US organizations and individuals filed 45 amicus briefs urging the Supreme Court to reject the Texas law, included the American Medical Association, American College of Obstetricians and Gynecologists, US Solicitor General, state and federal legislators, and hundreds of leading voices from the fields of law, theology, entertainment, business and national defence. The briefs also featured the largest coalition of faith leaders and faith organizations ever to oppose anti-choice laws at the high court, as well as a ground-breaking collection of individual stories that underlined the importance of access to safe and legal abortion in women’s lives.” (CRR, 28 March 2016)

On 16 November 2015, the Campaign newsletter reported that the case had been filed, see: US Supreme Court to Review Texas Clinic Shutdown Law. The Court heard the arguments on 2 March 2016. We showcased the comments of the three women Justices, who were outspoken during the hearing with their pro-choice views.

The consequences for women and abortion clinics in the US, had the judgement gone against us, were unimaginable. But the possibility of a tie vote was very real. That Justice Anthony Kennedy joined the opinion of Justice Stephen Breyer and the three women Justices, Ruth Bader Ginsburg, Sonia Sotomayor and Elena Kagan, all four strong abortion rights supporters, was a huge relief.

The majority opinion, read by Justice Breyer, drew on the Court’s 1992 ruling to argue that the law must not be used to place an “undue burden” on women’s access to a legal abortion. By placing medically unjustified regulations on freestanding abortion clinics, as the state of Texas and many other US states have sought to do, Texas surely aimed to close the clinics down, despite their protestations to the contrary. The Court’s judgement roundly rejected anti-abortion claims to want to protect women’s health by relying on what the National Association for Pregnant Women called “junk science”. Rejecting “junk science”, by taking account of both scientific and clinical evidence regarding what regulations are and are not needed to ensure the safety of abortion, was one of the most important achievements of the ruling.

However, in spite of the victory, reversing the damage done will not be easy or happen overnight. Rewire quotes Madeline Gomez, a reproductive justice fellow at the National Latina Institute for Reproductive Health in Texas:

“For all 29 years of my life, the right to abortion has been under attack… In the years since [the Texas law] has passed, I have heard from friends who have waited weeks and been forced to drive hours just to get an appointment at a clinic. And, as my colleagues and I wrote in an amicus brief the National Latina Institute for Reproductive Health filed with the Supreme Court, women of color in Texas, particularly the 2.5 million Latinas of reproductive age, have been disproportionately affected by the clinic closings resulting from the expensive, onerous, and medically unnecessary standards [it] imposed.”

The rejected regulations would have led to the closure of all but about 10 clinics – in a state with a population of almost 27 million in 2014, covering 268,820 square miles. But in the period while the law was being challenged, 19 of 40 clinics had closed, and not all of them may re-open.

National Abortion Rights Action League Pro-Choice Texas Executive Director Heather Busby told Rewire that at least eight clinics have been sold and reopened by other businesses or organizations. One was demolished, and although some are still owned by the abortion providers:

“it’s unclear at this point how many may consider reopening. For those facilities that may want to resume providing abortion services, there are several hurdles to jump through first. Clinics will need to rehire staff, re-purchase medical equipment and supplies, and find physicians who provide abortion care. This last obstacle may be one of the more difficult ones to overcome… You also have the other challenge of getting licensed by the state, and this is Texas. Texas has grown particularly hostile on the administrative side, and currently licensed facilities are reporting an increasing number of surprise inspections and state inspectors are being “unduly harsh….”

The knock-on effect for about 25 other US states’ anti-abortion laws (most in the midwest and southeast) is likely to be huge, and in the coming days, a lot of column inches will be spent on analysing how this is likely to play out. Hopefully, many restrictive state laws will have to be repealed.

National Advocates for Pregnant Women (NAPW), who tabled an amicus brief with the New York University School of Law Reproductive Justice Clinic on behalf of 14 US organisations, celebrated the decision. Their amicus brief had argued that, if upheld, “the Texas law would prevent some women from having an abortion, force others to have abortions outside of safe medical settings, and make those who do so potential targets for arrest and prosecution”. The decision, they said, gives strength and meaning to the “undue burden” standard of Constitutional review of laws designed to restrict access to abortion health care. It also establishes that cases addressing pregnant women’s access to abortion and protecting that access involve “important human values”. 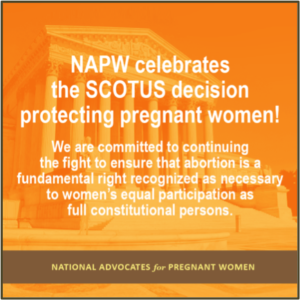 However, NAPW said, the decision still falls short of “recognizing that for people with the capacity for pregnancy, principles of equality demand that all reproductive health decisions, including abortion, must be protected as fundamental rights under the highest standard of review”.

If someone were to calculate the amount of time and money that has been spent in the USA (let alone globally) in opposing anti-abortion laws and policies, in repairing anti-abortion damage to abortion clinics, in disseminating the truth in response to anti-abortion lies, e.g. about Planned Parenthood and other service providers and advocates, in prosecuting anti-abortion murderers of doctors, in defending women who have been criminalised for having abortions (not to mention for having miscarriages and stillbirths), and in trying to stop anti-abortion harassment of clinic staff and patients – the amounts would be staggering.

President Obama’s support for this decision was welcome: “I am pleased to see the Supreme Court protect women’s rights and health today…”, he said. But his failure to show leadership on this issue up to now has been a major disappointment. And his fulsome statement did not even mention the word “abortion”, not once. The Attorney General Loretta Lynch’s statement was stronger, condemned the many obstructive state laws against abortion and affirmed the Department of Justice’s determination to support reproductive freedom. Yet so many US states have managed to pass obstructive laws, and with apparent impunity.

The locus of power in preventing efforts to stop women from having legal abortions seems to be everywhere and nowhere, in the USA as well as elsewhere. This judgement does not ensure women’s right to an abortion any more than the US Constitution did, or the 1973 Supreme Court judgement that said abortion was a private matter between a woman and her doctor, or the 1992 judgement either. In the face of a powerful movement against abortion, abortion rights and services in the USA remain under serious threat from three sources: Republican Party presidential candidates, federal and state legislatures and courts dominated by anti-abortion politicians, and well-funded anti-abortion institutions, groups and individuals, including violent and extremist ones. But women’s reproductive rights are threatened as well by the silence of those who speak out in support of contraception but not abortion, and those who do not speak out at all.

On the positive side, it can be hoped that this decision will have a knock-on effect internationally too. Some in the US anti-abortion movement have been peddling their form of action beyond US borders and perhaps even funding it too, especially in Latin America and Africa. One can only hope yesterday’s decision will put the brakes on those efforts, and that other countries’ politicians will take note – that anti-women, anti-abortion lies and injustice can be exposed for what they are and must be rejected.

The anti-abortion movement claim they support life. But their support disappears at the moment of birth, at the moment when potential life becomes actual. They never mourn all the women who have died due to unsafe abortions, nor do they offer to support the motherless children of those women, let alone the children of women who have died in childbirth. Nor do they ever offer to take responsibility – from the moment of birth – for all the babies they believe every woman should be forced to produce – by law, by the anti-abortion laws they espouse.

Abortion is a fact of life for women. From one-in-three to one-in-five women around the world has an abortion in her lifetime. Anti-abortion laws and regulations are therefore anti-women by definition; they intend and cause actual harm to as many as one-third of the female population across the globe, and especially adolescents. The US Supreme Court’s judgement couldn’t resolve everything, but it has offered hope that justice for women and the right of access to abortion services are still possible.