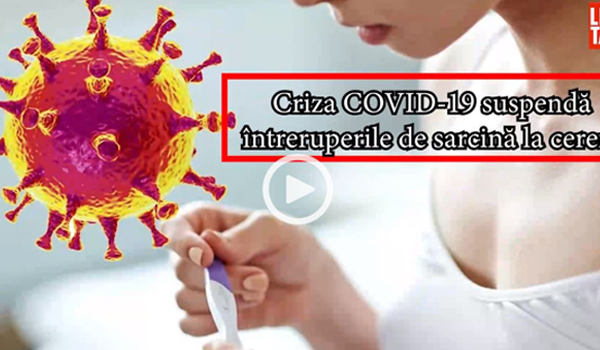 There were problems with reproductive health services for women during quiet and more peaceful times, but during this pandemic, things have seriously worsened. In the past week, a group of 18 women’s rights NGOs and independent activists alerted the Ministry of Heath, the Institute of Public Health and the World Health Organization Office for Romania of their opposition to the following Covid-19 related policies:

Although Nelu Tătaru, Minister of Health said: “We commit to observing women’s rights, no one will oblige them to give birth against their will and each situation will be analysed on a case-by-case basis. If a woman wishes to have a pregnancy termination, she will have to sign that she knows the risks under Covid-19 [sic]. We strive to minimise risks as much as possible, by keeping women in the hospital for only one day.”

And Dr Radu Vlădăreanu, President of the Obstetricians & Gynaecologists Society of Romania, said: “No one can oblige a woman to have a baby. And it is natural for us to take care that the provisions of the State of Emergency should not be interpreted by physicians who are «more Catholic than the Pope» as imposing additional restrictions on women… I hope that medical abortion will be used more in Romania, as it is used to a large extent in Europe and is a safe method and advisable for women. Perhaps it may result in a decrease of surgical abortion on request.” He denied that abortion on request would be regarded as a non-emergency procedure and therefore forbidden under the military order covering the emergency.

The facts are these:

The Royal Hospital too has “temporarily suspended such medical activities until further regulations”. Giulești Maternity hospital told us pregnancy terminations on request are not possible during the state of emergency, meaning at least until 17 May. Two of the largest private clinics, Regina Maria and Medicover, have communicated that abortions are not provided on request [even though it is legal up to 14 weeks of pregnancy] but only if a medical problem is discovered as a result of a medical consultation.

In mid-March, a woman was fined in Prahova because she did not observe quarantine. Why? She went to the hospital because she was haemorrhaging after an abortion. This was reported by Scena9, in an article on the situation of pregnant women who were about to deliver during these times.

Libertatea continued their research trying to find a clinic providing abortions on request. The search did not succeed.

They then switched their request to asking for a medical abortion, namely, being given a prescription. When the Regina Maria clinic said no abortions on demand are provided, the reporter asked if she could obtain a prescription for the necessary medication for abortion with pills. She was offered the possibility of talking to a doctor, but the clinic stressed the fact that no abortions on request are provided. Sanador clinic said there was no option for a medical abortion and, moreover, no abortions are being provided during the state of emergency.

Sfânta Maria clinic said no because they didn’t have a physician, but they offered the possibility of a gynaecological consultation, either with referral or for a fee, but said that they could not guarantee a prescription for a medical abortion, as the doctor had to make that decision. Medsana clinic said they performed no abortions. With other clinics, we were also given the possibility of a gynaecological checkup, after which the physician would make a decision whether to recommend medical abortion, with no guarantee of that decision.

On 10 April, 15 women’s rights organisations wrote urgently to the Minister of Health to ask him to restore at least the following three services essential for Romanian women’s reproductive and sexual health:

Apparently, he has changed something to do with breastfeeding on the Ministry’s website. But otherwise, at this writing, he has not replied.