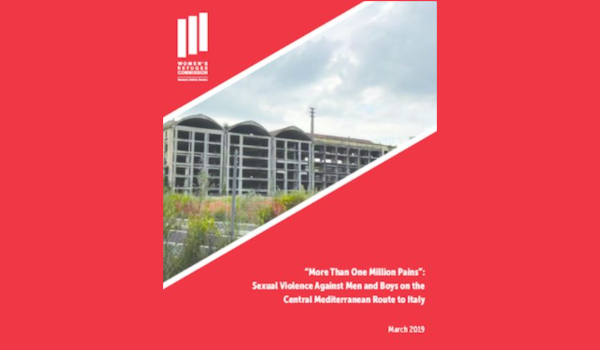 “More Than One Million Pains”: Sexual Violence Against Men and Boys on the Central Mediterranean Route to Italy

Every year since 2014, tens of thousands of refugees and migrants have travelled the central Mediterranean route to Italy, one of the most active and dangerous migration passageways in the world. Along the way, many experience kidnapping, exploitation, extortion, and enslavement. Large numbers die in the desert, are confined to hellish detention centers in Libya, or drown at sea. Sexual violence against refugee and migrant women and girls is rampant throughout the route. Women and girls also face sexual violence, including sexual exploitation and trafficking, in Italy. Less is known about the men and boys who undertake this journey. These knowledge gaps are of concern, given that an estimated 87.5% of refugees and migrants who have entered Italy via the central Mediterranean route since 2016 are men and boys, the latter of whom are largely unaccompanied.

The Women’s Refugee Commission (WRC) conducted a qualitative exploratory study to examine the nature and characteristics of sexual violence perpetrated against refugee and migrant men and boys traveling the central Mediterranean route to Italy. We also looked at intersections with violence against women and girls. In October 2018, WRC undertook fieldwork in Rome and Sicily. Methods included key informant interviews with 63 humanitarian personnel and service providers, 10 focus groups with 52 refugees and migrants, and two focus groups with 10 guardians and service providers. The University of New South Wales granted ethics approval for this study and the University of Palermo’s Department of Psychological, Pedagogical, and Education Services reviewed and approved the research protocol.

1. Sexual violence against all refugees and migrants – women, men, girls, boys, and persons with diverse sexual orientation, gender identity and expression, or sex characteristics (SOGIESC) –appears to be commonplace along the central Mediterranean route. Sexual violence, including conflict-related sexual violence and sexual abuse within families, is a reason why some refugee and migrant men and boys leave their home countries. During the journey to Italy, they encounter sexual violence at borders and checkpoints, during random stops by armed groups, and while kidnapped and imprisoned.

2. Sexual violence, including sexual torture, against female and male refugees and migrants appears widespread in Libya. Sites of sexual violence include official detention centers, clandestine prisons, in the context of forced labor and enslavement, during random stops and at checkpoints, in urban settings by armed groups, and in private homes. Sexual victimization is usually not a single event; findings suggest that refugees and migrants are repeatedly exposed to multiple forms of sexual violence by a variety of perpetrators in contexts of impunity.

4. In Italy, some refugee and migrant adolescent boys, young men, and persons with SOGIESC are being sexually exploited and abused, although the extent is unknown. Little attention has been given to primary prevention of sexual exploitation and abuse among refugees and migrants in Italy.

5. The short- and long-term psychosocial and health impacts of sexual violence against men and boys are wide-ranging, as they are for women and girls. Impacts include depression; anxiety; post-traumatic stress disorder; sexually transmitted infections, including HIV; genital and rectal trauma; hemorrhoids; sexual dysfunction; and urinary problems. With good quality treatment and support, many survivors are able to achieve some degree of recovery.

6. In select cities in Italy, a handful of local organizations are providing comprehensive, good quality services for male and female survivors, yet need far outweighs service availability. In general, the existing networks of post-sexual violence service providers are not equipped to respond to male survivors and are unable to adequately meet the needs of female survivors.

7. The study found multiple barriers that undermine male and female survivors’ access to care, and identified enablers that could be leveraged or built upon to facilitate service uptake. In Italy, where the study was conducted, barriers include anti-migration legislation, socio-cultural norms and beliefs, communication barriers, limited awareness of the issue among service providers, and poor referral networks. Enablers include supportive legislation for male sexual violence survivors, robust civil society efforts, and existing models of service provision for male and female refugee and migrant survivors of sexual violence that can be replicated.