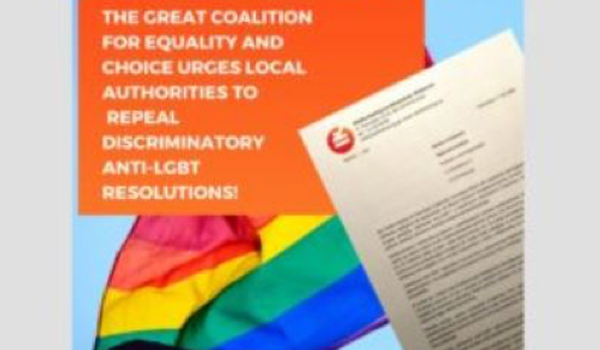 In recent months, around 93 local councils in around 14 districts in Poland have adopted anti-LGBTI statements or resolutions. These resolutions are incompatible with the Polish Constitution and basic standards in the international human rights law that Poland has undertaken to respect. The language is scandalous: the resolutions speak of “stopping gender and LGBT ideology”, “aggressive homosexual propaganda”, “stopping homo-terror and sexualisation of social life”. These resolutions drive fear, contempt and hate towards LGBTI persons.

In response, Polish activists created the Atlas of Hate showing the towns and villages that adopted shameful resolutions. These resolutions are mostly concentrated in the southeast of the country and already account for around 30% of Polish population. Most recently, the local council in the city of Łódź adopted a so-called “Local Charter of Family Rights” based on the model put forward by the Polish anti-rights organisation Ordo Iuris. This is in the name of “protection of the traditional family” which is allegedly threatened by LGBTI+ persons. In practice, it means that no training on countering discrimination and no sexuality education can take place in the communities who signed the resolution.

The Great Coalition for Equality and Choice (a Polish coalition of over 100 feminist organisations and informal groups united under a women’s rights umbrella (SRHR and combatting violence against women) sent a letter to mayors calling on them to declare these scandalous resolutions invalid, in hopes of some reasonable and humane reaction.

On 18 December 2019, the European Parliament adopted a resolution condemning Poland’s ‘LGBTI-free zones’, based on an EU directive on non-discrimination. On 4 February 2020 the EU Commissioner for Equality, Helena Dalli, spoke out against towns in Poland that have labelled themselves “free” from lesbian, gay, bisexual, trans and intersex communities.

In practice, it is people who are the target, individual human beings, not an ideology. Promoting hate speech which instigates violence is totally unacceptable. Additionally shocking is that it sometimes originates from the same public authorities who should be responsible for the promotion of anti-discrimination and protection of human rights.