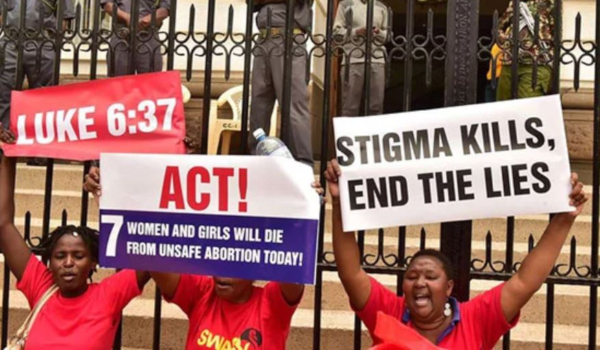 On 25 April 2019, a coalition of 11 civil society organizations (FIDA Kenya, Ipas Africa Alliance, KELIN, Network for Adolescent and Youth Africa, Red Tape, Reproductive Health Network Kenya, Right Here Right Now, Trust for Indigenous Culture and Health, Women’s Link Worldwide, Xhale Africa and Bunge la Wamama Mashinani) with the Center for Reproductive Rights and over 500 individuals, under the umbrella Team Life, delivered a petition to Nairobi County Governor, Mike Mbuvi, demanding the immediate removal of billboards and advertisements near traffic lights and on streetlight poles within Nairobi city that convey inaccurate and misleading messages on the legality of abortion services in Kenya. The petition also demands that all advertisements about public health services fully adhere to the Kenyan Constitution and the health laws.

The 13 billboards and posters sponsored by the religious group Sozo Church of God near traffic lights and on electricity poles along Nairobi’s main roads state “Abortion is Murder!” or “Shut down abortion clinics!” under a picture of a fetus. Another says “Your mother gave you a chance, it wasn’t easy then too. Give your baby a chance!” with a picture of a fetus in cupped hands.

are apparently the latest in a string of misinformation attacks on women’s sexual and reproductive health and rights. “The messages on the billboards fuel stigma and misinformation on abortion creating an environment that adversely affects reproductive health providers and women seeking these services. The messages also contradict provisions of the Constitution, which is the supreme law of the land and one we all have a duty to defend,” said Evelyne Opondo, Africa Regional Director for the Center for Reproductive Rights.

“The government has a responsibility to protect its citizens from inaccurate information particularly on a matter of public health of such magnitude. Such blatant misinformation should not be licensed by a government that has prioritized health as part of its Big four agenda. We demand that the Nairobi County pulls down the billboards with immediate effect,” said Jedidah Maina, Executive Director, Trust for Indigenous Culture and Health.

Abortion is legal in Kenya in cases of emergency and when a woman’s life or health are at risk. Emergencies necessitating abortion include miscarriage, ectopic pregnancy, when the fetus cannot survive outside the mother’s womb and sexual violence. However, shame and stigma prevent many women and girls from seeking emergency quality health care services, including abortion. As a result, there has been an increase in the number of women and girls seeking more clandestine services from unqualified doctors and quacks whose lack of medical expertise further endangers the lives of patients.

In Kenya seven women die every day from unsafe abortions; these deaths are preventable. An estimated 464,690 women underwent an abortion in Kenya in 2012 and nearly 120,000 women were admitted to public health facilities that year for severe complications, according to a study conducted by the African Population and Health Research Center and the Ministry of Health. Further, the report found that unsafe abortion accounts for a quarter of maternal deaths in Kenya.