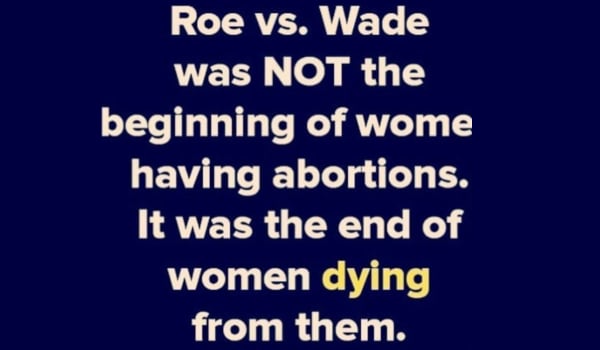 This is the concluding statement of a sobering article by Michelle Goldberg in the New York Times on 16 May 2019. In it, she discusses the differences for US women and doctors when abortion was illegal before the 1973 Supreme Court decision in Roe v Wade and what could happen if Trump-nominated judges in the Court were to dismantle or overturn the decision in the future.

Goldberg writes: “Feminists sometimes say, of threats to legal abortion: “We won’t go back”. But it’s important to understand that we’re not necessarily facing a return to the past. The new wave of anti-abortion laws suggests that a post-Roe America won’t look like the country did before 1973, when the court case was decided. It will probably be worse. True, in a post-Roe America, some women would be able to get abortion-inducing medications that weren’t available the last time abortion was criminalized…. But today’s legal context has been transformed by decades of anti-abortion activism equating abortion with murder, as well as by mass incarceration.”
SOURCE: New York Times, by Michelle Goldberg, 16 May 2019 ; INFOGRAPHIC: @ewarren