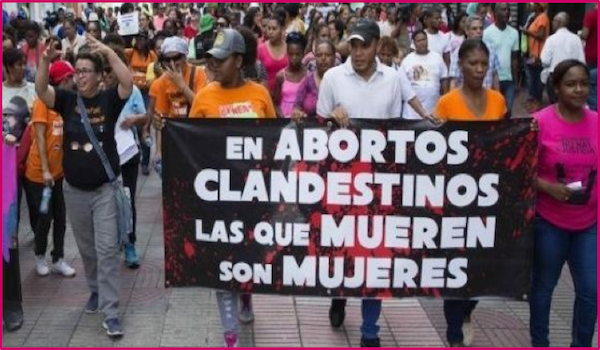 Opening avenues for discussion over decriminalizing abortion, the Dominican Republic Chamber of Deputies failed to pass the new Penal Code on 11 July that would have continued the country’s current prohibition of abortion under any circumstances.

“This historic event marks a milestone for those who defend the right to autonomy,” Colectiva Mujer y Salud, a non-profit organization, said in a statement at the end of the Lower House vote.

Hours before the vote, members of human rights organisations and women’s health collectives held a demonstration outside the parliament building.

The Deputies could not reach a consensus after nearly five hours of discussion. The vote was 84 in favour of the new Penal Code, which makes all abortions illegal, and 64 against. To pass it needed 110 votes in favour. This is because, according to the Dominican Constitution, when a bill is vetoed by the president of the Republic Danilo Medina, as happened in this case because of abortion, a three-quarters vote of the two legislative chambers is required to override the veto.

Since the proposal didn’t receive a high enough majority, it will have to be reintroduced in the National Congress. The current Criminal Code, which dates back to 1884, women will be penalized if they abort in any circumstances including if their life is at risk or if the fetus has no chance of survival.

According to the country’s Ministry of Public Health, unsafe abortions cause 10% of maternal deaths. Data from local women’s rights organisations shows there are nearly 35,000 abortions in the country each year.

In May 2017, not for the first time, President Medina recommended abortion law reform to decriminalise abortion in cases of pregnancies that pose a risk to the life of the woman, are the result of rape or incest, and where the fetus will not survive outside the womb.

The news comes as a study by the Ministry of Public Health has found that Haitian women account for nearly 30% of maternal deaths in the Dominican Republic. According to Guzman Minister of Public Health Marcelino, Haitian pregnant women cross the border into the Dominican Republic seeking better health care services. Many still suffer fatal complications for lack of proper prenatal care.