Home » Safe Abortion Day » USA- After a month of unprecedented personal obstruction by Donald Trump, appeal court orders him to desist and “Jane Doe” has an abortion 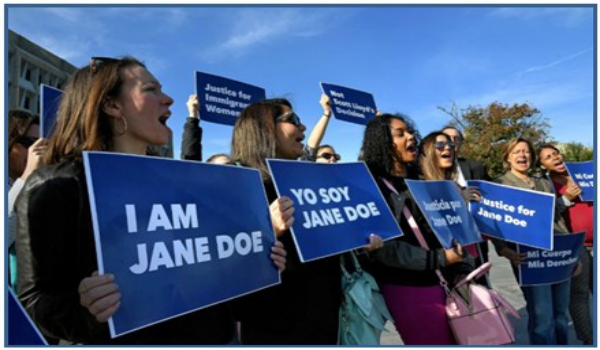 More than a month after she made her decision, “Jane Doe”, a young Mexican migrant in Texas, USA, was able to have an abortion on 25 October after a federal appeals court in Washington, DC cleared the way for a federal district court to order the Trump Administration to stop blocking her access and allow her to get the care she requested.

Brigitte Amiri, senior staff attorney with the American Civil Liberties Union Reproductive Freedom Project, had this reaction: “Justice prevailed today for Jane Doe. But make no mistake about it, the Administration’s efforts to interfere in women’s decisions won’t stop with Jane. With this case we have seen the astounding lengths this administration will go to block women from abortion care. We will not stop fighting until we have justice for every woman like Jane.”

Excerpt of Jane Doe’s statement, via her guardian:

“My name is not Jane Doe, but I am a Jane Doe. I’m a 17-year-old girl that came to this country to make a better life for myself. My journey wasn’t easy, but I came here with hope in my heart to build a life I can be proud of. I dream about studying, becoming a nurse, and one day working with the elderly.

When I was detained, I was placed in a shelter for children. It was there that I was told I was pregnant. I knew immediately what was best for me then, as I do now – that I’m not ready to be a parent. Thanks to my lawyers, Rochelle Garza and Christine Cortez, and with the help of Jane’s Due Process, I went before a judge and was given permission to end my pregnancy without my parents’ consent. I was nervous about appearing in court, but I was treated very kindly. I am grateful that the judge agreed with my decision and granted the bypass.

While the government provides for most of my needs at the shelter, they have not allowed me to leave to get an abortion. Instead, they made me see a doctor that tried to convince me not to abort and to look at sonograms. People I don’t even know are trying to make me change my mind.… This is my life, my decision. I want a better future. I want justice.”