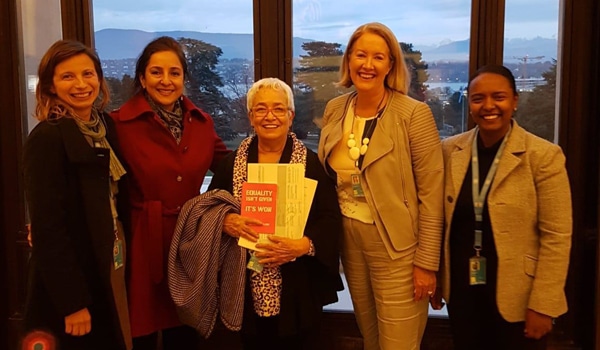 Statement: All states
must ensure access to safe and legal abortion as a matter of human rights, say
UN experts

As an essential
reproductive healthcare service for women and girls, access to safe and legal
abortion is critical to ensure their fundamental right to autonomy, equality
and to physical and mental health, UN human rights experts* said.

On the occasion of
International Safe Abortion Day, the experts issue the following statement:

“Denial of access to
safe and legal abortion drives service provision underground into the hands of
unqualified practitioners, and exacerbates the risks to the health and safety
of the affected women, in the form of pregnancy-related injuries and death. It
is estimated that 25 million unsafe abortions take place every year, causing
the preventable deaths of about 22,000 women, almost all in developing
countries. Additionally, an estimated seven million women and girls experience
injuries resulting in impairment and infertility. In contrast, countries where
women have the effective right to abortion on request, supported by affordable
and effective family planning measures, have the lowest abortion rates.

“In too many States
abortion is still criminalised, or not accessible in practice, even where it is
legal. Some women face incarceration for the decision to terminate a pregnancy,
even when their own health is at risk. Some are incarcerated in cases of
miscarriage. According to international human rights standards, States have an
obligation to refrain from the use of criminal law to punish women for ending a
pregnancy, as well as to repeal restrictive laws and policies which put women
and girls’ health, safety and lives at risk.

“States should
guarantee access to legal, safe and affordable abortion and post-abortion care
for all women and girls. Those living in poverty, in rural areas, with
disabilities, as well as migrant and indigenous women and those belonging to
ethnic minorities, continue to be the most affected by structural
discrimination limiting their access to health care, including abortion
services. Women and girls in situations of crisis, whether due to conflict,
natural disasters or economic austerity measures, also face an increased risk
of harm.

In this context, we
welcome the adoption by the UN General Assembly of a landmark ‘Political
Declaration on Universal Health Coverage’ on 23 September 2019, which restates
the need to ensure universal access to sexual and reproductive healthcare
services and reproductive rights.

In recent years, we
have observed a positive trend in several parts of the world towards removing
barriers to accessing legal and safe abortion, which we hope will be followed
by other countries as well.

Constitutional bans
were removed, criminal provisions were repealed by constitutional courts, laws
were passed taking abortion out of criminal codes and regulating the service in
health legislation and the right to safe abortion was reaffirmed by some national
Courts as a constitutionally protected right. In others countries, women who
had been detained and sentenced to long incarcerations after stillbirths or
miscarriages were released.

However, there are
also attempts, in various parts of the world, to restrict access to this
essential health service for women. Politicised religious conservative
movements are making a concerted effort to roll back the rights of women and
girls by pushing for criminalization of the procedure, with harsh punishments
for those seeking and providing abortions. In some countries, the introduction
of legal restrictions on access to State funding for, and universal coverage
of, sexual and reproductive services, affects women’s ability, in particular
the poorest and most marginalised, to access abortion, with severe human rights
consequences. These measures are regressive and perpetuate abortion stigma
which is harmful to women and girls’ ability to make important decisions about
their health.

Twenty-five years
after the International Conference on Population and Development where
governments committed to ending unsafe abortion worldwide, which was
reconfirmed at the Fourth World Women’s Conference, we cannot go backwards. The
devastating consequences on women’s and girls’ lives and health caused by
unsafe abortions leave no space for retrogression. All States should
acknowledge that abortion is part of health care and is a matter of human
rights, integrally linked to women and girls’ dignity and rights to life,
health, equality, and privacy.