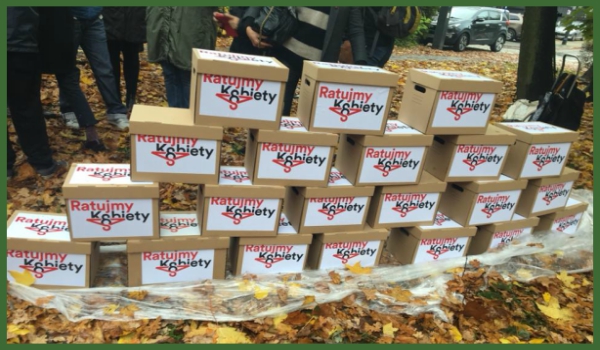 On 23 October, the “Save Women” Civic Committee tabled a bill on women’s rights and voluntary parenthood signed by almost 500,000 Polish citizens. The lower Chamber has three months to initiate a debate on this bill, but it will be up to the ruling party whether it will be taken further – as promised in the election campaign – or be rejected.
The bill calls for:

This is a record number of signatures – double that of last year’s campaign. It has been collected since August 2017 by grassroots voluntary groups, in dozens of cities, towns and villages across Poland and abroad. It was also supported by many extra-parliamentary opposition parties and numerous NGOs, including the Federation for Women and Family Planning and the Great Coalition for Equality and Choice. The full list can be found here. The official threshold – 100,000 signatures – was reached within the first month.

According to the latest opinion poll, 40% of citizens support liberalisation, another 40% support the status quo and only 11% would prefer a stricter law. Meanwhile, anti-choice groups are collecting signatures for a bill that aims to ban abortion in cases of fetal malformation, which is promoted by Catholic bishops and churches, and supported by the Prime Minister.
“In the past year, the ruling party has blocked access to emergency contraception as well as restricted IVF. There is also no sexuality education. First, the government wants to force women to give birth to incurably sick children and then it will forbid abortion in cases of rape and incest. Polish women will soon end in hell,” said Barbara Nowacka, representative of the “Save Women” committee.