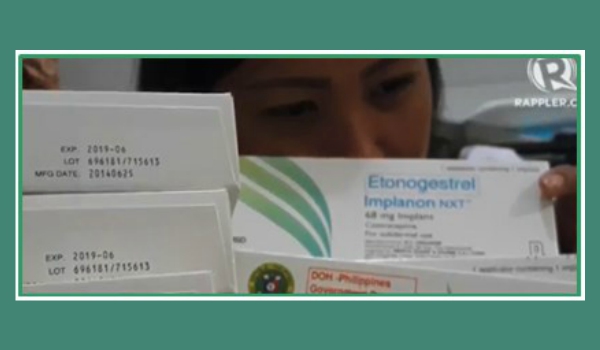 On 12 November 2017, the Philippine Food and Drug Administration have certified that contraceptive implant brands Implanon and Implanon NXT are not abortifacients, that is, they do not cause abortion. No, they are contraceptives!! This was just part of a so-called re-certification process for all 51 contraceptives that used to be available in the Philippines, which were subjected to a two-year (temporary) restraining order issued by the Supreme Court in 2015 against the 2012 Reproductive Health Law.

While the so-called Temporary Restraining Order was only imposed on the Implanon implants initially, the SC ruling also included a clause banning the Food and Drug Administration from “granting any and all pending application for reproductive products and supplies, including contraceptive drugs and devices.”

This led to the gradual phasing out of contraceptives in the country. The Commission on Population recently warned that if the Temporary Restraining Order was not lifted soon, 90% of contraceptives would disappear from the market, presumably because they would be past their expiry date.

Department of Health Secretary Francisco Duque III vowed to fully implement the Reproductive Health Law, despite his past stance on the issue under former President Gloria Macagapal-Arroyo, when only “natural” methods were allowed. The Department of Health also welcomed the Food and Drug Administration statement on contraceptives.