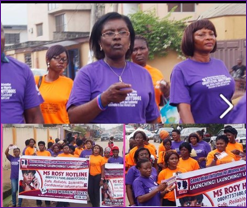 Generation for Women and Youth Network (GIWYN), the National Coalition for Safe Abortion and other organizations will celebrate the Sept 28 Campaign in three states in Nigeria. We have produced a video posted to Facebook on Sept 9 to kickstart the Campaign. We have also organised a Forum for Reproductive Justice Activists to create a space to introduce them to this year’s themes. The WGNRR Colouring Book was introduced to activists to paint and express themselves on the subject of ending abortion stigma and gender stereotypes as root causes of unsafe abortion. The Forum was a safe platform for interaction between younger older people, including policymakers, civil society and human right organisations, to talk about changing negative attitudes of people and society, and ending abortion stigma and discrimination against women who choose to have an abortion. We will also promote the Ms Rosy Toll Free Hotline. And we participated in the MAMA Media Campaign to mark September 28 and distributed our policy brief.