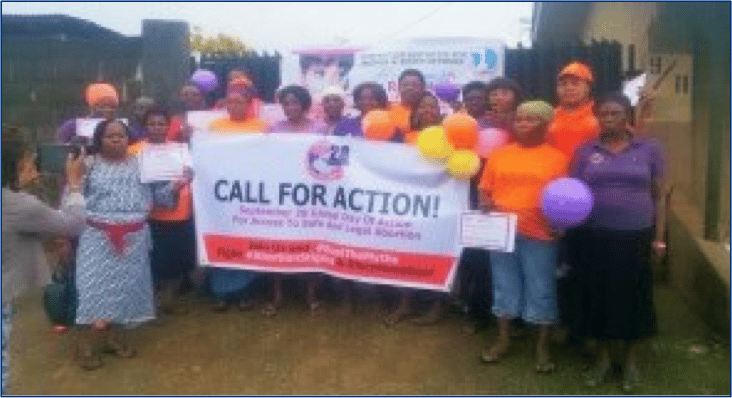 This Generation for Women and Youth Network (GIWYN) and the National Coalition and others celebrated the September 28 Day of Action in two states in Nigeria (Lagos and Imo States). The activities included:
• A forum was organized at Owerri which included: Deputy Directors of Management Board, Midwives, Nurses, Nurse Attendants, Ttraditional Birth Attendants, Politicians, Staff of a Family Planning Unit, Ipas Imo State and other women, girls and men.
• Publication of an article in the African Herald, a national newspaper, which has 10,000 readers.
• Advocacy visit to King Oba, a traditional ruler, at his palace, calling on him for support in ending stigma and discrimination against women’s reproductive and sexual health and rights, including abortion, by advocating for a society that is free of stigma and discrimination.
• Busting the Myths with balloons.
• The Ms Rosy Hotline was re-launched and a video was produced to mark the re-launch. Watch it here
• Social media campaign on Twitter and Facebook
• Participation in Women Help Women’s video: “Pill Wars”

In the events organized, we reached thousands of people, counting the newspaper readership. In the events in Lagos and Owerri, 100 people participated; 40 of them were young people, including young people living with HIV, and 9 were decision-makers. The participants, including health providers and politicians, are now aware that abortion is a right and not a privilege. They can differentiate between myths and facts relating to abortion. Also, the Ms Rosy Hotline was re-launched and the protocol for misoprostol rehearsed.

This September 28 mobilization created a safe platform for interaction between young, old, policy makers, civil society and human rights organizations to exchange ideas and create awareness towards the change of attitude of people and society in ending abortion stigma and discrimination towards women who choose to have an abortion.