Home » Safe Abortion Day » IRELAND – No One Left Behind: the theme of this year’s March for Choice in Dublin 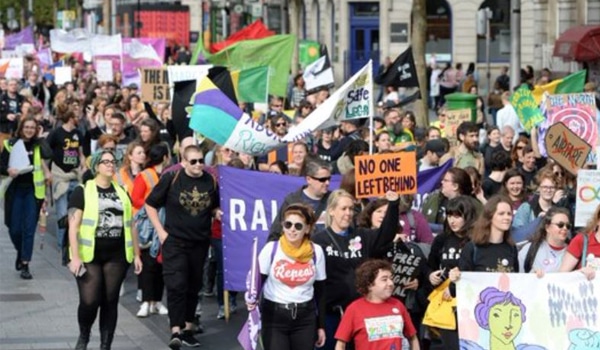 “It has been more than a year
since the landslide vote for abortion rights in Ireland, yet last weekend
hundreds of people were once more marching through the streets of Dublin,
chanting: “Get your rosaries off our ovaries!” “It’s nonsense, what are they marching
for?” a guard standing on the road outside the National maternity hospital
asked a colleague on a motorbike – referring to the 2018 referendum in which
the Irish public voted overwhelmingly to repeal the law prohibiting abortion.

“The answer is that, while the
law may have changed, many people are still struggling to access abortions in
Ireland due to a lack of provision, the time restrictions on terminations, the
illegal activities of anti-abortion campaigners – and an enduring legacy of
shame,” writes Caelainn Hogan in the Guardian.

The Abortion Rights Campaign asked women to send
them a blog on why they were marching. One woman wrote: “Last year I marched while pregnant; this
year I’ll march with my daughter.

Last year’s March for Choice was a strange
one for me. The march itself was wonderful – I was a steward and got to lead
chants while walking alongside the crowd. I love the chance
to berate the government with a megaphone. But it was also an exhausting day
for me, as I was nine weeks pregnant….

“In retrospect, I maybe should have pulled out of
stewarding, but I don’t regret a moment of it. I was constantly hungry, and the
smell of most foods made me feel queasy. But I did it, powered by Haribo, tea,
joy and anger; joy for the huge change that had happened, and anger for
everyone who’d been failed by our laws…. I watched as the
post-repeal abortion legislation was debated, nausea fading and my belly
growing bigger…. Legislation is one key piece of free, safe, legal, local
access to abortion, and our legislation isn’t good enough. Three-day waiting
periods, criminalisation of doctors, conscientious objection – the legislation
is riddled with paternalistic and stigmatising barriers. Still, it was a start.

“Pregnancy is hard work –
physically, emotionally and mentally draining, even without complications. I
don’t think I understood so viscerally how important abortion was until I was
pregnant. I was incredibly happy to be pregnant, but I would never force
someone to remain pregnant against their will. I’m looking forward to marching
without feeling like throwing up. And I am beyond excited to bring my daughter
to her first march at the grand old age of five months. I’ll be celebrating
everything we’ve achieved in making Ireland a better place, particularly for my
daughter’s generation. But just like last year, there are people across Ireland
facing pregnancies they can’t continue, and our laws will fail them. I will not
stop marching until free, safe, legal abortion is a reality across this island…
and for everyone still awaiting reproductive justice.”

The Abortion Rights Campaign says the
theme of the march reflects the numerous people who are being failed by
Ireland’s abortion legislation. In particular, they want to highlight this
statement from MERJ
Ireland about migrants and
ethnic minorities, which begins: “More than a year after the
referendum, MERJ is writing a statement to address the reality of abortion for
migrants. We are starting to receive information on issues migrants face in
accessing abortions and we think it is important to bring attention to them:
migrants’ issues were in fact brushed aside during the campaign and during
conversations about the legislation….”