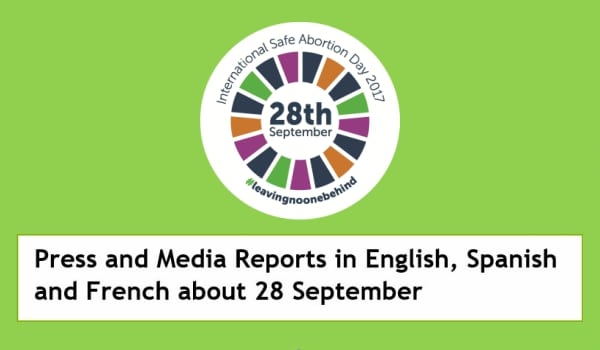 Overall, coverage of the day focused on the Statement by the OHCHR group of United Nations human rights experts calling on States across the world to repeal laws that criminalize and unduly restrict abortion and policies based on outdated stereotypes, to release all women in prison on abortion charges and to counter all stigma against abortion. The experts also called for 28 September to become an official UN day for safe abortion worldwide, to help encourage governments to decriminalize abortion and provide reproductive health services in a legal, safe and affordable manner.

The press were also particularly interested in the WHO/Guttmacher Institute study published to mark 28 September in the Lancet (see report above), which found that 25 million unsafe abortions (45% of all abortions) occurred every year between 2010 and 2014 – of which 97% were in Latin America, Africa and Asia. Importantly, however, it also found that only 14% of unsafe abortions were “least safe”, or very unsafe, a distinction made in the data for the first time, a significant indicator of change on the ground towards safer abortion.

In countries as diverse as Australia, Brazil, Burundi, Egypt, Kenya and Mexico, coverage of either of these two global statements seem to have provided reporters with a hook to spotlight injustice with regard to unsafe abortion in their own countries and call for access to safe abortion. Their reports often went on to delve deeper into the legal framework and cultural norms in their own country context, and include interviews with women who had experienced restrictive policies first-hand, photo-stories or videos.

There were an extraordinary number of reports about the Irish March for Choice on 30 September, following from the recent announcement of the Irish abortion referendum in 2018. We saw extensive coverage of abortion restrictions in Poland too, centred on the anniversary of the Black Monday protest where women took to the streets to demand access to safe, legal abortion. Similar protests and actions were covered throughout the world, including in Argentina, Belgium, Colombia, India, Indonesia, Malawi, South Africa and Venezuela. Meanwhile, news articles from the US highlighted the violence against women of the Global Gag Rule. In addition, many advocates and activist groups published blogs and articles about the significance of the day and for their work, such as Human Rights Watch and Doctors of the World, including personal accounts of campaigning on abortion.

Both the International Campaign’s press releases and our website were cited by the media when reporting on the day, one even included the Wikipedia page about us. These reports recognised the significance of Campaign members’ work in calling for universal access to safe abortion. Their articles are evidence that many members’ actions are motivating mainstream media outlets to speak out and write about campaigns for the right to safe abortion.

We have a list that is over 20 pages long of all the news stories we found that marked 28 September and we have included one-sentence summaries of what each of them covers. Take a look at the complete list in English, French and Spanish. We will of course have missed many other reports, not only in English, French and Spanish but also in all other languages from around the world.

SO PLEASE SEND US MORE PRESS/MEDIA REPORTS: It would be fantastic if you could send us any you have found that are not on our list, all languages welcome, so that we can include them too. Send details in the format below to press@safeabortionwomensright.org; we’ll be very glad to hear from you.