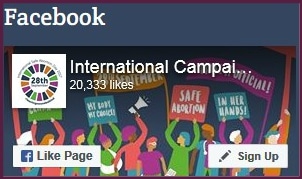 28 September is anything but a one-day event. In fact, it’s still not over. On 14 October, there is a march in the streets of Belfast, Northern Ireland, to demand that we all #TrustWomen to make their own decisions about their pregnancies.

The social media response this year, although it started on 28 May (International Day of Action for Women’s Health), really got going in the week of 28 September and is ongoing with #KnowYourRepealers (started in Ireland) and opposition to the 20-week abortion ban bill in the US Congress keeping up the momentum.

Our top tweet in September was the Campaign’s call to world leaders to stand up for women’s right to safe abortion. Our tweet which most engaged the media reported the statement by UN experts urging “all States to end the criminalisation of abortion”. Over all almost 20,000 organisations and individuals saw our tweets from 27 September to 30 September, around 500 of these actively engaged with our content.

A really exciting visual development on the day was the release of WHO’s infographics in support of safe abortion. These garnered thousands of retweets as a valuable resource.

Overall, there was a lot of excitement on the day itself – we engaged with more than 360 different accounts from more than 40 countries. We had chats and shared ongoing live events with many members from Nigeria to Indonesia, Argentina to Ireland, the United States to Kenya.

We were overwhelmed by the number of reports of members’ activities and didn’t manage to individually tweet all those shared in our newsletter (or vice versa). But they are all being uploaded to our website and can soon be found here.

Facebook was slower to stir, as usual, but we gained an extra 166 followers on the day! Our Instagram account, while still small at 180 followers, mostly SRHR organisations, did particularly well. On all platforms our new logo and posters, designed by Laura Malan, received a lot of positive feedback from members as well as the public. The posters were translated into 4 languages (English, French, Spanish, Italian) thanks to pro-active members who initiated them. For the first time, we felt we had given a personality to the Campaign Coordination’s engagement with the day.

The main hashtags for the day – #LeavingNoOneBehind, #IResistWePersist, and #UnGritoGlobal – were all widely used but were occasionally mixed up or wrongly worded. The date itself was variously represented on #28S, #28Sept and #Sept28.

Overall, the day was an incredible success, and we hope the social media exposure and the relationships we’ve built will contribute to the day continuing to grow year on year.