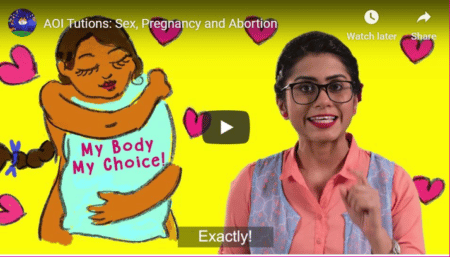 On International Safe Abortion Day 2019, Agents of Ishq (AOI), in partnership with the #MyBodyMyChoice campaign, released a nine-minute video (with English subtitles) that discusses sex, pregnancy and abortion. The video is part of an effort by sexual and reproductive health and rights organisations to use policy advocacy to address critical health issues. The melodramatic Bollywood clips notwithstanding, the tutorial is blunt and straightforward.

AOI founder Paromita Vohra says: “We wanted
to do it in the myth-busting fashion because abortion comes with the notion of
being a terribly depressing fate. It’s made out to be the worst thing that can
happen to you.” She believes these perceptions don’t really stem from the emotions of the women or men who may
find themselves in this situation. “It’s a result of cultural messaging
that we have all internalised,” she says. “It’s the reason why the video
is called Bin Bakwas Ekdam Khas – because it was about time we talked abortion
minus the shame.” Along with the video, AOI released a signature campaign
inviting people to pledge to #SupportChoiceNotStigma. Actor Sonam Kapoor was
among those to endorse it.

Note: The information about use of medical abortion pills in this video
is correct for India but not necessarily for other countries.