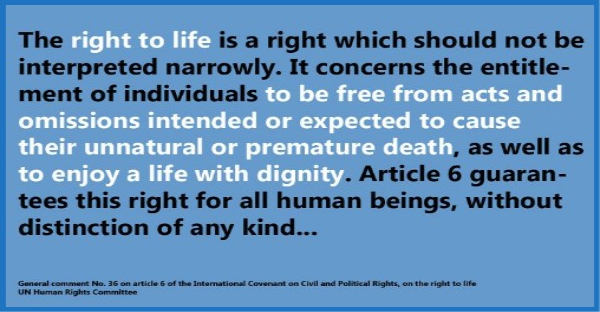 On 14 July 2015, during its 114th session, the Human Rights Committee (HRC) commenced the process of drafting a General Comment on the right to life, to revise the existing General Comment at Article 6 of the International Covenant on Civil and Political Rights. They called for submissions on the views of national human rights institutions, non-governmental organisations, and academia. The summary of what took place can be found at this link and here the over 100 submissions they received. During its 115th session, the Committee commenced its first reading of the draft text.

The HRC then completed its review and revision of the draft text at its 120th session in July 2017, published it on its website – Draft General Comment on Article 6 of the International Covenant on Civil and Political Rights – Right to life – and invited all interested stakeholders to comment on the new draft by 6 October 2017. This time around, they received some 166 submissions including from some 23 states, most of them in the global north; 7 UN agencies, specialized bodies and experts; 33 academic and other professionals; 3 national human rights and other institutions; and over 100 NGOs. These submissions can be found here.

Of the 71 paragraphs in the July 2017 version of the draft General Comment, only Paragraph 9 is directly about abortion. Yet, a great many submissions from NGOs were anti-abortion and many others from abortion rights advocates, as was the case in the previous round.

From the governments, a quick glance at a few found that Brazil, Canada, Egypt, and Namibia did not mention abortion. Denmark supported “the Committee’s view that state parties should provide access to safe abortion and not criminalise girls and women who have undergone an abortion, nor the service provider”. Japan said: “There is a huge leap in logic between any “legal restrictions on the ability of women to seek abortion” and “a pregnant woman undertakes unsafe abortion. Even if a State party prohibits abortion, it does not necessarily require a pregnant woman to undertake unsafe abortion, thus it would only be in extremely limited circumstances that the State is responsible for a woman’s death as a result of her undertaking unsafe abortion.”

The Polish government’s statement spends two of its eight pages directly on abortion and more on protecting human life from conception. The Federation for Women and Family Planning’s analysis of their statement is that they intend to reintroduce the death penalty, will seek further criminalization of abortion in cases of fetal impairment and try to make women criminally accountable for abortion.

We submitted a statement on behalf of the Campaign. It opens with our aims and guiding principles, and then continues:

“…There is only one reason that can justify why safe, legal abortion can and should be treated as a human right – that human rights begin only at birth and with independent life, and not before. On this basis, there can and should be no exceptions if a pregnant girl or woman seeks an abortion…

“… It is dismaying that Paragraph 9 is once again becoming the main subject of submissions on this General Comment… Yet every other paragraph of this document is absolutely essential in regard to the myriad gross violations of the right to life affecting so many people around the world today, and would benefit from outside expert comment.

“Beyond this particular document, …while doing your/their utmost best to support women’s right to life and health and need for safe abortion, the Human Rights Council, the different human rights treaty bodies, the OHCHR Working group and Special Rapporteurs are each using differing language about abortion in general comments, statements and recommendations to countries. Recently, in one case, the Supreme Court of the UK found the language of such a recommendation wanting in legal terms, and its majority ruling was an enormous disappointment as a consequence. (See Law of Nations, by Kirsten Sjøvoll, 28 July 2017) This demands attention.

“Hence, we would like to recommend that a joint review of all such statements and recommendations should be carried out by those bodies, working groups and special rapporteurs with the aim of drafting a unifying set of principles and recommendations on abortion as a human right for consideration and approval, ones which cannot be discounted in court due to legal weaknesses and which will serve as a blueprint when countries are ready to improve their laws and policies on abortion to the benefit of pregnant women’s right to life, health and non-discrimination.”

On 1 November 2017, the Human Rights Committee published an information report for the media (not an official statement) on its progress in revising the General Comment, which said:
“The Human Rights Committee this morning continued the second reading of the draft General Comment No. 36 on article 6 of the International Covenant on Civil and Political Rights on the right to life. The Committee adopted introductory paragraphs 6, 7 and 8 on deprivation of life, States’ obligation to refrain from arbitrary deprivation of life, and enforced disappearances.  The Committee also began discussion on paragraph 9 on termination of pregnancy…

“On paragraph 9 on termination of pregnancy, [the Committee Rapporteur] Mr. Shany said that many non-governmental organizations had submitted their comments, reminding that there was a diversity of moral convictions and legal positions on the issue. He proposed that the paragraph be moved to the section on the relationship of article 6 with other articles of the Covenant and other legal regimes. Some stakeholders flagged potentially prejudicial references, such as fatal impairment of the fetus. In general comments, Experts observed that the language of the draft paragraph was no longer consistent with the Committee’s positions on abortion, as well as with the position of some other committees. Some Experts stated that the Committee should bear in mind that it was a universal human rights body that could not go beyond what regional courts had ruled on the question of abortion. The Committee had not taken a position on whether the life of the fetus fell under article 6; that was for each State to decide. The paragraph should focus on the right of women and girls to life and health. The obligation of States to provide affordable access to safe abortion should be underlined in the paragraph, some Experts noted. Some of them also questioned the proposal to move the paragraph to the end of the text, since it dealt with a central aspect of the right to life.

“Mr. Shany asked Committee Experts to present their proposals to paragraph 9 in a constructive manner in order to reach a compromise, as well as to address stakeholders’ submissions.”

On 2 November, in another information report for the media, the Committee continued its discussion about paragraph 9. “Experts emphasised the need for the decriminalization of abortion because its criminalisation led to unsafe abortions which undermined the right to life of women and girls. The Committee’s centre of gravity might have changed with six new members [of 18] who had not taken part in the first reading of the General Comment, as well as in the Committee’s case law. The Committee should, therefore, state how far it had gone on the matter of abortion, keeping in mind the consistency with its own case law. Paragraph 9 dealt with a huge health and social policy problem and the Committee should provide a clear guideline for the future, rather than impose rules on States. It would take years and probably decades to achieve decriminalisation of abortion everywhere. Experts favoured a legal approach to the paragraph rather than philosophical or ideological ones…”

This session seems to have discussed some language issues and definitions; no substantive progress or agreement on content was mentioned. The next meeting was set for 10 November. It seems it will be some time before paragraph 9 is resolved.