Home » Safe Abortion Day » GERMANY – Actions in over 30 cities: Take abortion out of the Criminal Code! 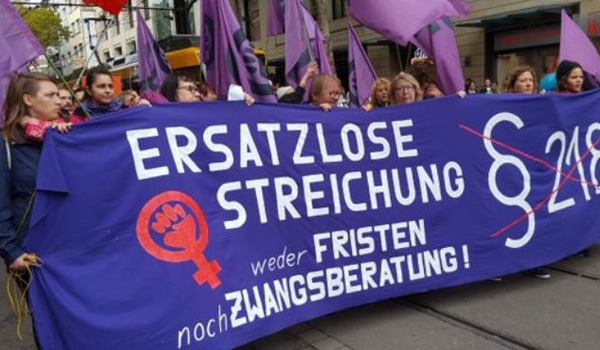 For
the first time, people in more than 30 cities took action for International
Safe Abortion Day. The Bündnis für Sexuelle Selbstbestimmung (Alliance for
Sexual Self-Determination) is a coalition of voluntary groups in Germany. Activities
for 28 September were organised by the Pro-Choice Coalition, Pro-Choice_DE,
which consists of groups throughout Germany, that have been popping up over the
past year due to current pro-choice struggles.

In Köln, people gathered in front of the main station and marched into the city centre. In the Literarischer Salon at Leibniz University in Hannover, Meredith Haaf led an “informative, interesting, impressive and courageous discussion about abortion”. More than 500 people marched in Hamburg. In Gießen, the demonstration started at 11 am from Berliner Platz, demanding decriminalisation of physicians who provide abortion as part of regular healthcare and destigmatisation of people who decide to end an unwanted pregnancy.

The Pro-Choice Coalition on Twitter posted many reports and photos
of other events.

Why go into the streets for International Safe Abortion Day? This video gave five reasons:

All
activities in Germany are listed here.