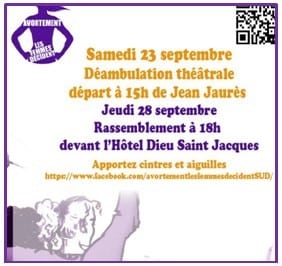 Le Collectif de défense de l’IVG is organising three activities in the Haute Garonne in response to the European call for the right to safe abortion and for the International Day of Action for Safe Abortion on 28 September. On 23 September, there will be a demonstration leaving from the Allées Jean-Jaurès at 15:00 hours. It will be followed by an evening/debate at 19:00 hours at l’Espace des Diversités (38 rue d’Aubuisson). On 28 September assemble for a rally in front of the Hotel Dieu Saint Jacques at 18:00 hours – carry hangers and knitting needles.

A European petition was launched online and will be handed over to the European Parliament on 28 September. We are mobilizing in solidarity with women all over Europe. Abortion is prohibited in Malta and under severely restricted in Ireland, Hungary and Poland. The right to abortion, even if it is legal, can be restricted by: the abuse of a conscience clause by physicians (Italy), the absence of adequate services (Greece, Bavaria), the closure of abortion clinics during health system restructuring (France), and in all countries, by the election of reactionary, conservative and regressive  governments.

Financing of abortion clinics and family planning centres is needed to make them accessible in all countries. Sexuality education must be provided so that each person can make free and informed choices. The legal limit for abortions must be harmonized in line with the most progressive countries in Europe, and Member States must fully decriminalize abortion.