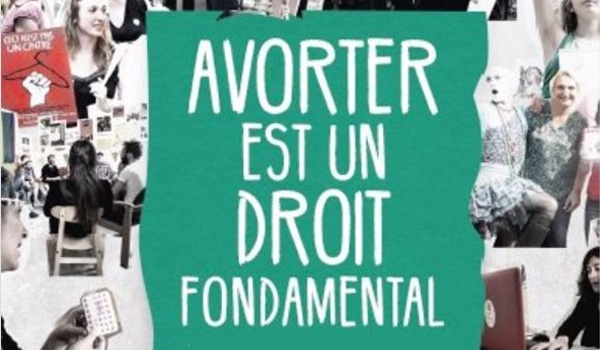 In France, although abortion
is still in the law, it is still not “legitimate”, women are
regularly asked to justify themselves. Many people speak of abortion as a
“failure”, of those women who are not able to “use contraception
properly and who” become pregnant “by” accident “. All
these words are internalized by women, which sometimes causes a feeling of
worthlessness when someone is faced with an unplanned pregnancy
situation. Only 36% of the world’s population lives in countries where
abortion at the woman’s request is permitted.

Demonstrations for the right to abortion took place across France, including in Paris, Bordeaux, Lille, Marseille, Nantes, Toulouse, Tours

In
Gard, the local Planning Familial organised a Ciné-Débate entitled
#QuandJeVeuxSiJeVeux (When I want, If I want) on 27 September at the
@CinePlanet in Alès via Twitter. They made this
statement in support of these actions:

“In 2019, the laws that we thought were well established
in Poland, Italy and the United States are now weakened, while in France access
to abortion is made difficult by the closure within the last few years of 130
abortion clinics, the fact that many doctors are now using the conscience
clause to refuse to practise abortion, the closing of maternity hospitals and the
serious lack of resources for public hospitals.”

And the local Planning familial of Douarnenez organised two events: they showed #Female Pleasure, a feminist documentary by Barbara Miller, which traces the career of five impressive women from five countries who are fighting for freedom from prejudice, violence against women, and the right to bodily autonomy. After the film, there was a discussion organised in association with Toile D’essai. Then, on 28 September, they held a public rally in front of Les Halles where there was a sound system and activists read excerpts from the book “I had an abortion and I’m fine, thank you!” for the group Les filles des 343 (feminist activists and the right to abortion). Women were invited by Twitter to send their personal testimonies of abortion to them. The texts they received were also read out, anonymously.

Watch this video of Veronique
Sehier, co-director of MFPF, talking about abortion and 28 September in France,
Europe and the world.