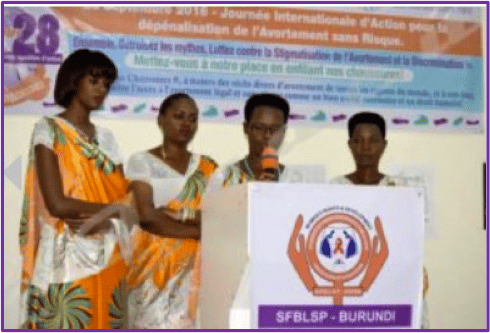 Backstreet abortion a reality in Burundi: report of a survey

The group Solidarité des Femmes Burundaises pour la Lutte contre le SIDA et le Paludisme (SFBLSP Burundi) celebrated 28 September by reporting on a survey they conducted in four provinces of the country, including Bubanza, Cibitoke, Bujumbura and Bujumbura city. It found that the numbers of unsafe abortions is increasing year after year with serious consequences. The figures come from different health centres; the main groups surveyed were young girls and women, victims of incest and sexual abuse. In a public meeting, the group called for access to contraception for young girls and women and access to safe abortion.

“We are very much concerned about the increasing number of clandestine abortion performed in different localities. Burundi government has to adopt laws concerning access to safe and legal abortion following cases of sexual abuse, incest or when the pregnancy is a serious danger for a woman’s life”, explained Esperance Ntirampeba, the chairwoman of SFBLSB. She says it is hard to have two doctors who will permit legal abortion as it is stipulated in the Burundi penal code for a pregnant woman whose life is in danger.

In the discussion that followed, it was noted that Burundi has not yet ratified the Maputo Protocol.