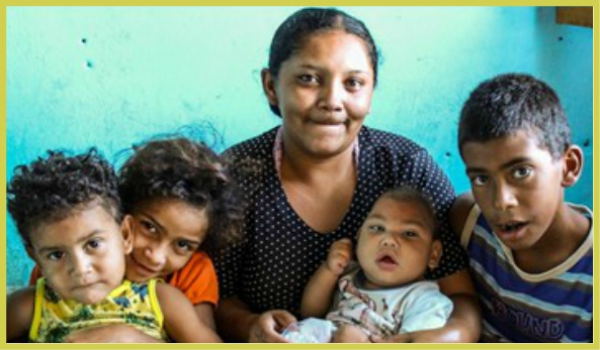 Barely more than children themselves when they give birth, many of the forgotten mothers of Zika-stricken babies in the Brazilian state of Alagoas are shiny-new teenagers, just learning to navigate their developing bodies. Traversing the challenges of motherhood at that age is tricky at best; attempting to navigate them with a baby who carries the mark of the mosquito is almost unthinkable.

Rakely Santos da Silva was only 15 when she gave birth to her “special” child. She told women’s rights activist Debora Diniz, who was traveling across Alagoas interviewing mothers of babies affected by Zika, that she had no idea her daughter, Mirela, had congenital Zika syndrome when she was born.

Mayara Santos de Oliveira was 16 when she gave birth in Maragogi, Alagoas, to her “special” baby, a boy named Alejandro. If she had a fever, a rash or muscle aches during her pregnancy, Mayara didn’t recognize them as typical symptoms of Zika. “These women have been living with tropical diseases for a long time,” Diniz said. “They told me, ‘I felt some pain in my body but nothing different from everyday life.’ Dengue, chikungunya, malaria, it’s just another experience of the body.”

These girls, and others like them, are raising their Zika-stricken newborns in Alagoas, a tiny state in Brazil’s poverty-stricken northeast, between Pernambuco and Bahia, the epicenter of the 2015-16 Zika epidemic.

Though most states in the northeast of Brazil show startling numbers of Zika-related pregnancies and births, the official numbers in Alagoas are low. That struck Diniz as more than odd: “There’s no good reason to believe the epidemic had bypassed the state. Alagoas is a small, forgotten area, with one of the highest adolescent pregnancy rates in the country. So there’s no way to believe that.”

Her institute set up a research project. In a 45-day trip, they visited 21 municipalities, over half of which had officially registered cases of children affected by Zika. As they entered each town, they went to the local “taxi/motorcycle” stand and asked drivers whether they knew of any babies affected by Zika. When the answer was yes, they hired a ride to their homes and did a home-by-home registration of women who had babies affected by Zika. They found that of 49 women included in the study, 10 had babies with Zika who had been discarded from the official count. This is because Alagoas requires a CT scan of a newborn’s brain in order to add them to the official count. Only two hospitals in the state own a CT machine; the waiting list for the test is months long. Moreover, none of the Zika-affected babies who Diniz’s team evaluated was receiving proper follow-up care.

“These women were ignored before the arrival of the Zika epidemic,” Diniz said. “They are low in social class, education, culture. They are unknown women in the political world, and they are the most vulnerable.”