ASAP launched a month-long film festival celebrating Sept 28th. The overall objective was to create awareness around the issue of abortion access and stigma in general and to give space to voices of youth from Asia in particular. The intention was also to increase the visibility and encourage dialogue on women’s bodily autonomy and rights. PROMOTION VIDEO

During the film festival we launched a video series entitled Conversations about Abortions from Asia. In these videos our Youth Champions talk about the situation of law and abortion access in their countries and share their experiences about working to challenge the stigma and barriers to safe abortion access women face. 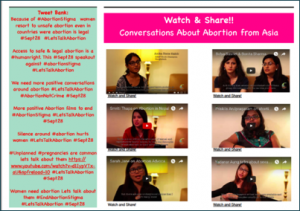 In India, Dr Souvik Pyne organized a small event at the Indian Institute of Public Health, Bhubaneswar, Public Health Foundation of India about the public health importance of safe abortion, and aimed to spread awareness about issues pertaining to safe abortion. The event included a briefing session, a public awareness drive, a film screening and discussions, a power walk and shoe-thon.