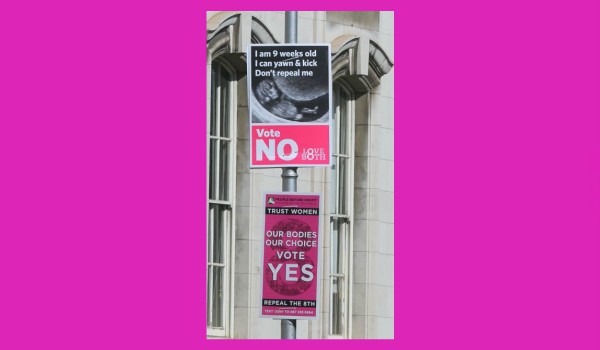 Fianna Fáil TD Timmy Dooley, who favours repealing the Eighth Amendment, has described as “disgusting” an anti-abortion leaflet depicting graphic scenes of fetuses, which was delivered to him in the parliament in early April in an envelope franked with a Government harp and marked freepost, without a stamp.

A very thoughtful article, well worth reading, opens by asking: “How will you explain the abortion referendum to your children? The short answer is, I’d hoped not to.” The article ends by saying: “I know that if I really want to protect my children from the world, then I have to prepare them. And to prepare them I have to give them information. And yet, if I could have chosen, I might have chosen not to explain abortion to a seven-year-old and a nine-year-old. On a trip into Dublin for new school shoes, they say they can’t wait for the posters to come down and the place to “get back to normal”. But wedged in between the LOL dolls and the camogie matches, abortion will remain; waiting to become relevant to their lives.”

Another mother expressed shock (‘I am absolutely horrified’) after her 16-year-old daughter received anti-abortion campaign material about the referendum at home in the post, stamped ‘to be opened by the addressee only’, which requested money to fund the anti-abortion group concerned. The mother described the six-page letter as a containing ‘propaganda’. It was seen by the Independent.ie, who report that it asked the recipient; “What kind of family is it where it’s OK to kill the tiniest and weakest members?”

The group who sent the letter raises close to €1m a year in donations from the public. They acknowledged this as “an unfortunate and exceptional error”. They claimed the girl gave her address at their stall at the National Ploughing Championships last year and that they were not aware she was a minor. However, the mother said her daughter was 15 when she visited the National Ploughing Championships, and that seven of her daughter’s classmates, who were on the same school trip, received similar letters from the group as well.

The father of Savita Halappanavar, who died at University Hospital Galway in 2012 because she was refused an emergency abortion when her miscarriage became septic, has called for a Yes vote in next month’s abortion referendum and urged photographs of his daughter to be used tor remind people why they must vote Yes. 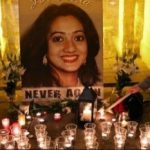 Together for Yes, the pro-choice coalition who are campaigning to repeal the Eighth Amendment to the Constitution on May 25th said they raised more than €200,000 in 11 hours during an online crowdfunding appeal for its national poster campaign on 10 April

Retired obstetrician and former chair of the Irish Institute of Obstetricians and Gynaecologists, Dr Eamon McGuinness, said nothing in the law had prevented him from carrying out an abortion where necessary to save the life of a pregnant woman, because the primary responsibility is saving the woman and giving her all the help she needs even if the life of the baby is at risk.

The Institute of Obstetricians and Gynaecologists held an extraordinary general meeting on 13 April to discuss the Government’s proposed abortion legislation. Divergence of views was expected to arise but the current chair of the Institute, Dr Peter Boylan, said 19 of the executive’s approximately 25 members attended the executive meeting at which the decision was made to support repeal of the Eighth Amendment. “Everybody voted in favour of the Institute being in favour of repeal. There was one abstention but nobody voted against it,” he said. He pointed out that all 19 maternity units across the State are represented on the executive. The organisation has approximately 200 members as a whole. He explained that “whenever there is anything of significance coming up that will affect obstetric practice there is a special meeting held in order to discuss the possible implications; that’s standard practice and that’s what we’re going to do”.

He said the Government’s proposals were aspirational “but we’ve a fair idea of what they will be proposing because a lot of it has been in the public domain”. If the referendum is passed “what we want to see is how this will affect practice, what are the implications for infrastructure, for GPs, practice nurses, nurse practitioners, midwifery practitioners and how will we organise ourselves, how will we organise guidelines”.

He added: “We don’t have another scheduled, organised meeting until the AGM in September. The legislation will be well on the way if the amendment is passed so it makes sense for us to sit down and discuss these issues now.”

The UK’s Royal College of Obstetricians and Gynaecologists, which most Irish gynaecologists and obstetricians are members of and which trains and accredits most Irish obstetricians, has also expressed its support for repeal of the Eighth Amendment. The College said in a statement it was ready to train Irish doctors to provide abortion services in Ireland if the referendum is passed on May 25th.

When I was 18, I knew nothing about anything and even less about abortion. I had never really thought about it. I suppose I had a vague feeling that it was a bad thing, to be contemplated only in extreme circumstances. And then in summer 1976 I had to discover what I felt about abortion. It took me all of 30 seconds.

Very few people in my part of the world went to university. I was a student… This lent me an aura of sophistication and knowingness that was laughably distant from the truth. But because of it, a male friend my own age called in and asked me to go with him to his house. His mother and father were in the sitting room with his sister who was, I think, 16. She was pregnant and she had made up her mind that she did not want to have the baby. Did I know how to go about arranging to have an abortion in England? What was I supposed to do?…

It’s at moments like this, when you find yourself under pressure to make a choice you are not prepared for… Sitting on the couch looking at that girl, two things were immediately obvious. One was that this was not about me or my feelings at all – it was about her. And the other was that the part of her that was most important here was not really her body. It was her mind, her free will, her right to make the decision she had come to. I just knew that I’d be a pompous little prig if I walked out… and a miserable little coward if I hid behind my ignorance.

I didn’t have the information she wanted but I was in a position to get it… I told the family I would be back the next day with the phone numbers they needed… Her father answered the door and I gave him a piece of paper with the information on it. I never talked to the family again about what happened. I just know that the girl was not pregnant that summer, that she was back in school in the autumn… and went on to have a good life.

Actually that’s not quite true. I do know something else: that girl is not a murderer. She is not a baby-killer and neither am I. I don’t wake up in the dark hours haunted by the ghost of a child killed by a hitman whose phone number I delivered. I just feel glad that, naïve as I was then, I knew enough not to be sanctimonious about choices I would never myself have to make.

Leo Varadkar, Irish Prime Minister, was reported on 24 April by the Irish Times as saying: “The issue is that nine women every day in Ireland are forced to travel overseas to end their pregnancies and three women in Ireland every day – which is only going to rise in the future – are importing pills online and taking them without medical supervision and guidance… What we’re putting to the people on May 25th is an opportunity to stop turning a blind eye, to stop turning a cold shoulder and to face up to the reality of abortion in Ireland and to change our constitution to provide women those services in our own country.”