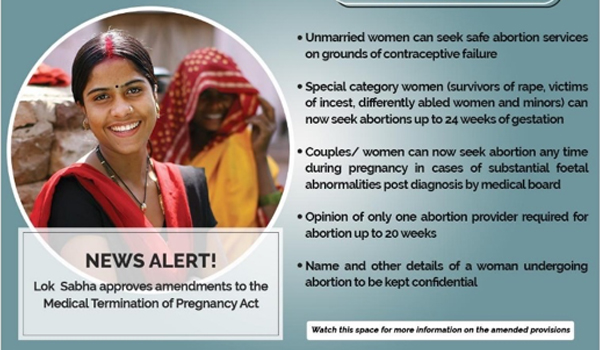 The Government of India passed the Medical Termination of Pregnancy amendment bill on 17 March 2020 in the lower house of India’s parliament. A report of the statements made by members reveals hopes for this law reform that are highly unlikely because of the limited changes it permits, for example: “The Bill will bring about socio-economic change and give a woman reproductive rights,” said Dr Shrikant Eknath Shinde (Shiv Sena). Chandeshwar Prasad (JD(U)) said, “The Bill will ensure women will not employ quacks for pregnancy termination procedures and hence reduce unsafe terminations. Others acknowledged its limitations, for example: “The Bill places the doctors in the centre of the decision for abortion and does not consider the right to abortion as a fundamental right of a woman,” said Ritesh Pandey (BSP).

The Ipas infographic above shows that the following clauses were added to the existing law:

– Survivors of rape and incest, differently abled women and minors can seek abortion up to 24 weeks.

– Abortion ca be sought at any time in pregnancy on grounds of substantial fetal anomaly.

– Opinion (sic) of only one doctor (instead of two) needed for abortions up to 20 weeks.

– Woman’s name and personal details to be confidential.

Perhaps the most vexing and problematic part of the new law is that it mandates the convening of medical boards by each state and union territory government, to consist of a gynaecologist, radiologist or sonologist, paediatrician, and “such other number of members as may be notified in the Official Gazette by the State Government or Union territory…” This Board will serve “the purposes of this Act to exercise such powers and functions as may be prescribed by rules made under this Act.” Or, to put it more simply, assuming they continue to play the role they have been playing up to now (and this is not yet said), they will have the power to give permission for any abortion over 20 weeks. As these boards do not yet exist in many places, forming them will delay implementing the new clauses and may serve as real blocks to increased access.

Thus, the group Hidden Pockets expressed dismay at the outcome, because the government refused to listen to the recommendations of activists and academics supporting abortion rights. They say the most important continuing problem is that doctors will “continue to be the ultimate yes/no person who will decide whether the woman can have her abortion” no matter what her age. They report:

“We have documented doctors extorting eye watering charges from unmarried women for medical termination of pregnancy and some doctors have even threatened to call the parents of young adults who wanted an abortion. Perhaps we need to double check on the authority which the law has bestowed on the doctors and that it can be misused for harassment and profits, especially when the women are in a vulnerable state…. We are equally saddened by the fact that amidst all the conversations around public health and corona, the law does not take into consideration any of the problems with current laws.”

The full text of the bill has not yet been released. Meanwhile, there are still 13 deaths from unsafe abortions daily in India, reports Health Issues India.