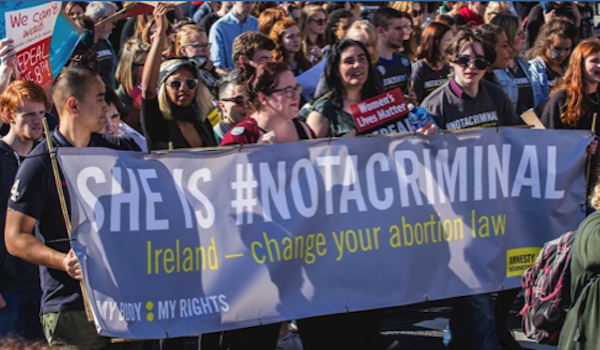 A woman in Ireland who was forced to choose between carrying her fetus to term, knowing it would not survive, or seeking an abortion abroad was subjected to discrimination and cruel, inhuman or degrading treatment as a result of Ireland’s legal prohibition of abortion, UN experts have found.

The independent experts, from the Geneva-based Human Rights Committee, issued their findings after considering a complaint by the woman, AM, who was told in November 2011 when she was in the 21st week of pregnancy that her fetus had congenital defects, which meant it would die in the womb or shortly after birth. This meant she had to choose “between continuing her non-viable pregnancy or travelling to another country while carrying a dying foetus, at personal expense and separated from the support of her family, and to return while not fully recovered,” the Committee said.

AM decided to travel to the UK for a termination and returned 12 hours after the procedure as she could not afford to stay longer. The UK hospital did not provide any options regarding the fetal remains. The ashes were unexpectedly delivered to her three weeks later by courier.

In Ireland, she was denied the bereavement counselling and medical care available to women who miscarry. Such differential treatment, the Committee noted, failed to take into account her medical needs and socio-economic circumstances and constituted discrimination.

“Many of the negative experiences she went through could have been avoided if (she) had not been prohibited from terminating her pregnancy in the familiar environment of her own country and under the care of health professionals whom she knew and trusted,” the Committee wrote in its findings.

The Committee said that, in addition to the shame and stigma associated with the criminalization of abortion of a fatally ill fetus, AM’s suffering was aggravated by the obstacles she faced in getting information about the appropriate medical options.

Ireland’s Abortion Information Act allows health care providers to give patients information about abortion, including the circumstances under which abortion services can be available in Ireland or overseas. But under the law they are prohibited from, and could be sanctioned for, behaviour that could be interpreted as advocating or promoting the termination of pregnancy. This, according to the Committee, has a chilling effect on health care providers, who struggle to distinguish “supporting” a woman who has decided to terminate a pregnancy from “advocating” or “promoting” abortion.

Ireland, which is a State party to the International Covenant on Civil and Political Rights (ICCPR), is obliged to provide AM with an effective remedy, including adequate compensation and psychological treatment she may need, the Committee said. Ireland is also obliged to prevent similar violations from occurring.

“To this end, the State party should amend its law on voluntary termination of pregnancy, including if necessary its Constitution, to ensure compliance with the Covenant, including effective, timely and accessible procedures for pregnancy termination in Ireland, and take measures to ensure that health-care providers are in a position to supply full information on safe abortion services without fearing being subjected to criminal sanctions,” the Committee’s findings said.

In its observations to the Committee on AM’s claims, Ireland said that the country’s constitutional and legislative framework reflected “the nuanced and proportionate approach to the considered views of the Irish Electorate on the profound moral question of the extent to which the right to life of the fetus should be protected and balanced against the rights of the woman.”

The Human Rights Committee considered this case under the First Optional Protocol to the International Civil and Political Rights Covenant, which gives the Committee competence to examine individual complaints. AM was represented by the Center for Reproductive Rights.