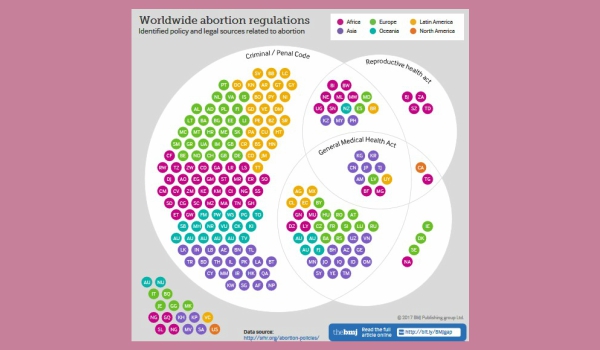 Global abortion rights do not escape poli­tics, but rather become embedded in na­tional democratic struggles over abortion.

“In the early 1970s, the first constitutional cases on abortion law in the United States and Western Europe emerged from the political agitations of a transna­tional women’s liberation movement. Whether or not these cases supported or resisted a woman’s right to decide, they all engaged with abortion as an object of political struggle over the terms and future of women’s citizenship. Women’s movements advanced abortion rights through constitutional law in an effort to radically restructure the social and economic order.

“The same was not true of abortion in international human rights law, which has been avowedly anti-political. The earliest cases in the European human rights system—men challenging newly liberalized laws for their effect on the “future of the nation”—were declared inadmissible precisely because they engaged the political stakes of abortion law. To this day, the European Court of Human Rights refuses to engage in the abstract review of abortion laws and has never stated whether the European Convention on Human Rights guarantees a right to abortion. At best, the Court admits that the regulation of abortion—and more broadly, the decision to become a parent or not—may engage an indi­vidual woman’s right to “respect for [her] private and family life.” This right variably protects a woman’s physical and mental integrity, as well as her personal autonomy and development. To the extent recognized under the European Convention, abortion rights are decidedly a matter of private—not public—life.

“The UN system has also never formally recognized or denied a human right to abortion. Rather, abortion has always sat uncomfortably within the reproductive rights recognized by international law. In the UN conferences of the 1990s, in particular the Cairo International Conference on Population and Development, governments recognized the human right to decide if, when, and how often to reproduce and to access means to exercise this right “which are not against the law.” This last phrase was understood as a reference to, and an exclusion of, abortion. Governments agreed to address the devastating public health impacts of unsafe abortion as a human rights concern, but to otherwise leave abortion to the democratic forces of the nation-state. At the Fourth World Conference on Women in Bei­jing, governments agreed not to reform but to review punitive laws on abortion as an effort to address abortion-related mor­tality. This public health framing profoundly shaped global abortion rights discourse. Unsafe abortion was a simple, descriptive cause of maternal mortality, and decriminalization was a pragmatic public health intervention available to reduce its harms. UN treaty bodies and Special Rapporteurs eventually adopted this logic for legal reform, calling on states to liberalize their criminal laws under the human rights to life and health as a technical policy measure to lower rates of unsafe abortion…”