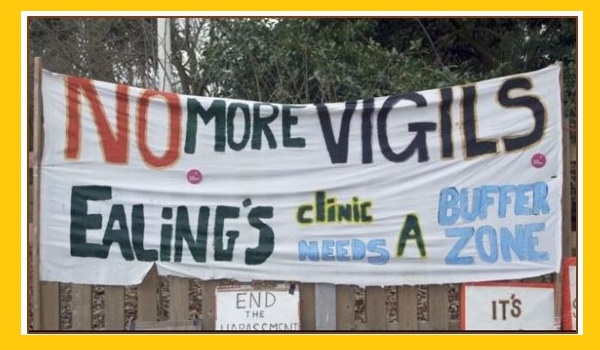 A 100m buffer zone will be created around the Marie Stopes Clinic in west London to stop vigils being held outside the building and harassment and bullying of women and staff entering and leaving the clinic. One source has said a fine would also be charged for an offence. More than 300 people wrote to the council describing the pro-life protesters as “intimidating and harassing”.

The London Borough of Ealing’s Council unanimously voted to implement a safe zone around the Marie Stopes clinic after women complained of intimidation by protesters. Applause broke out in the council chamber following the decision. A report presented to the council cabinet concluded that, following unsuccessful attempts to negotiate an informal “safe zone” near the clinic entrance, a public spaces protection order was appropriate. The report states that the “continued deployment of policing resources” outside the clinic was an “unusual and unnecessary use of local policing resources that could be deployed elsewhere”.

The Guardian reports that anti-choice campaigners have protested outside the Ealing clinic for 23 years. In that time, women have had had “holy water” thrown on them. If patients are alone, protesters shout: “Does he know you’re killing his baby today?” Some ask women to choose a blue or a pink rosary. Leaflets make false claims about the dangers of abortion. Some call women murderers, or tell them it isn’t a clinic, so they don’t go in. One woman who the protestors called ‘mum’ ran off into the park in tears. Her partner begged them to stop. She had wanted the pregnancy but there was a fetal abnormality. She didn’t end up going in that day and it was unknown whether she had ever gone back.

A public spaces protection order is also being considered by other local councils in the UK. Over the past six months, authorities in Birmingham, Manchester, Portsmouth and two other London boroughs, Lambeth and Richmond, have also discussed taking action.

More than 113 MPs cross-party have also signed a letter supporting the proposals. Amber Rudd, UK Home Secretary, has launched a national consultation on the introduction of new powers nationally to protect women.