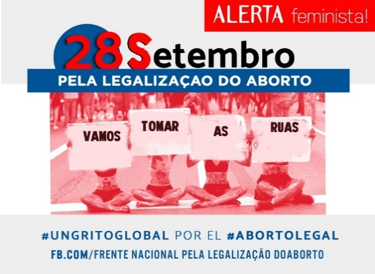 The National Front for decriminalization and legalization of abortion is calling Protest marches  to be held  in various Brazilian cities on 28 September. On 27 September the Front will also be running a Feminist 24 hour Protest  Streamon Facebook. An warm-up  session in preparation for the 24-hour stream was run on September 11, 12 and 13. Check here.

A Feminist Alert flyer was launched in early September to warn abortion rights activists about the risks of major setbacks at play in Congress where the conservative majority is pushing for various provisions aimed at further restricting access to abortion. Right now the more problematic are two constitutional amendments. At the Senate, PEC 29/2015 proposing the insertion of right from conception in the constitutional had was approved by its rapporteur in May and placed for being voted at the Committee of Constitution, Citizenship and Justice (check hereto read more). At the House, another constitutional amendment PEC 181/2015, originally aimed at expanding maternity leave rights has been amended to include language on the right of the unborn. It is ready to be voted by a Special Committee and if approved it will be send to plenary for final voting. Amnesty International Brazil launched an online campaign to pressure against its approval, which can be accessed here.