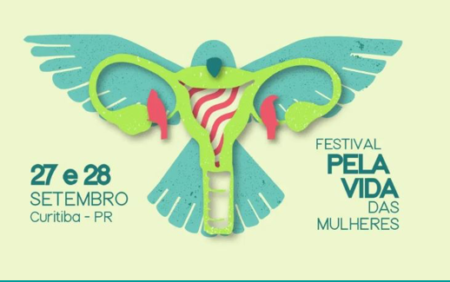 Organized by social movements from all over Brazil, the Festival for Women’s Lives took place on 27 and 28 September 2019. The event, organised entirely by women, aimed to discuss and debate women’s rights.

The events began on the 27th afternoon, with shows by women artists and artistic interventions as well as information on reproductive sexual rights. On the 28th, the programme featured the percussive project Baque Mulher, which together with the festival organisation will promote chat, yoga and maracatu at the Community School in Parolin, from 13:30. On both days, there were psychologists and lawyers explaining what to do in cases of sexual violence, where to seek help and how to obtain a legal abortion – allowed by law in cases of rape, risk to the woman/girl’s life and anencephaly in the fetus.

These events were planned by the Frente Nacional Pela Legalização do Aborto (National Front for the Legalisation of Abortion), which took place during its 3rd national meeting in Brasilia. The proposal was for social movements to mobilise on 28 September and to include the date in the calendar for women’s rights struggles. Sâo Paulo, Recife, Rio de Janeiro, Florianopolis and other cities in Brazil will have activities on these dates. Full schedule of events (em português)