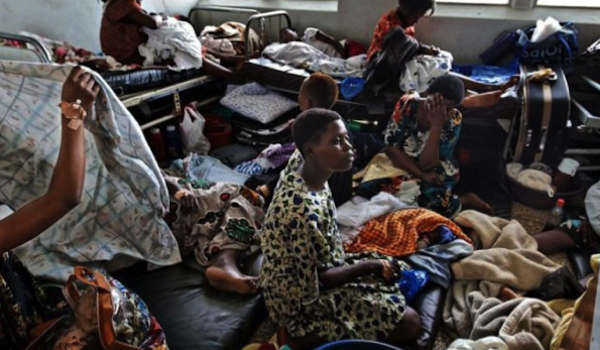 Once upon a time

Late afternoon. A few wisps of clouds shelter the waning sun in the hot, equatorial sky.

The relative quiet of the ward as day shift changes to afternoon shift suddenly turns into a state of urgency.

“Come quickly doctor … there is a woman bleeding.”

She has been bleeding heavily for one day. On the chart it says she had a previous normal pregnancy. She is now 4 months pregnant.

On the stretcher, an impoverished, emaciated 18 year old from the countryside, barely able to respond to her name.

Between her thighs, a few cloths heavily soiled with blood.

Many clots and obvious grape like clusters of tissue lying on the plastic sheet.

An IV with blood in one arm, an IV with salt water in the other arm.

Quickly she is moved to the evacuation room.

The available equipment and blood is less than optimal.

The doctor works as quickly as possible to remove tissue and stem the continuing bleed.

The onlookers, grim faced and silent nursing students, are uneasy.

The doctor asks them to see if they can locate more blood and equipment.

The bag with blood is now empty. Now only salt water is going into her in both arms.

But her hemoglobin is only 4 when she is first seen in the hospital.

Only blood will be able to replace volume and give desperately needed oxygen to her tissues.

The patient is so very pale.

She complained about the intrusion into her body at first but is now so quiet.

The tissue and blood coming from her insides is less now.

There is no more blood to transfuse.

Suddenly, the doctor feels a small shudder coming from his silent patient.

Looking at her face it is obvious. These are her last breaths.

Then she is no more.

The doctor rises from the work stool in front of her and moves to close her eyes.

Another woman has died, unnecessarily.

Another small child is left without a mother, unnecessarily.

Helen, died three years ago after an attempted abortion went wrong and took her life. Namono, her mother, says what hurts most is that Helen was her only child. “I did not know she was pregnant. I used to wake up very early from our rented room… and go to the market only to return at around 8pm,” she says. She had little time for her 16-year-old, Helen, who used to remain at home when she was at the market vending vegetables and fruits.

“That day Helen died, I received a call from one of my neighbours that Helen was bleeding profusely and she had difficulty breathing; when I rushed home, I found her eyes had turned white and she could not talk and had bled a lot,” Namono says. “I called one of the neighbours who helped me take her to the hospital. The doctors told me that her uterus and liver were damaged and after further investigation, the doctor discovered the uterus had holes.” The doctor told Namono somebody had pierced the uterus with a sharp object and the uterus had started rotting.

“After the burial, I went back to our rented house and as I was trying to put it in order, I got the shock of my life; I found different metallic wires and over 40 tablets I didn’t know, in her suitcase.” When I asked one of her friends who is also her classmate, she told me that Helen had conceived and she had tried to abort in order to continue with her studies.”

Helen is one of the many girls in the country who use crude methods trying to procure an abortion, which is why civil society organizations (CSOs) are calling for government to legalise abortion to save such girls, a contentious topic in a country where religious sentiments are strongly against abortion.

Macklean Kyomya, the executive director of Alliance of Women to Advocate for Change (AWAC), while launching the Safe and Legal Abortion Advocacy Campaign in Malaba town over the weekend, said the government should legalize safe abortion services in Uganda.

“Abortion is a fact of life. It is estimated that over 300,000 illegal abortions are being performed in the country every year. With a maternal mortality ratio of 438 per 100,000 live births, more than a quarter (26 per cent) of these deaths is attributed to unsafe abortions; decriminalizing access to safe and legal abortion services in Uganda is key to reducing unnecessary deaths.”

Uganda Demographic and Health Survey (2011) data show that every year, about 1,500 girls in Uganda die from complications resulting from unsafe abortion.

Christopher Baguma, an official from Uganda Harm Reduction Network (UHRN), said comprehensive services for safe abortion are needed; the sex workers should know what they are doing and in which manner, rather than using crude methods that will endanger their lives. “Let the government legalise abortion, for safer methods and also post-abortion care should be provided without stigmatizing the people and lastly, other family planning methods should be encouraged so that they don’t get pregnant and abort again,” he said.

According to Baguma, the CSOs want the commitment by government to address the diverse nature of women’s sexual and reproductive health issues, and uphold rights to decide freely upon all aspects of their body. “When our government fails to fully recognize sexual and reproductive rights, it does not only compromise women’s health but also tolerates and endorses violence towards all women and girls, abusing their human rights and perpetuating their exclusion,” he said.

Regina Nalebe, 26, a sex worker in Malaba, confessed that she has aborted four times using herbs, self-prescribed drugs and in hospital. “I became pregnant when I was 22 and the man disappeared. I tried the local herbs which I mixed with tablets; the experience was nasty, in fact I bled for three months, meaning the three months I was not working,” she said. Nalebe conceived again thrice, but went to a hospital where a doctor friend helped her procure a safe abortion. Lydia Namaganda, the chairperson of Malaba Kyosimba Onaanya Community Development Association said there are more than 500 girls in Malaba practicing prostitution.

“Here girls that sell their bodies use hard drugs, alcohol, marijuana and when they get pregnant, they use things like Omo, Coca-Cola, wires, herbs, tea leaves among others, to abort,” she said.