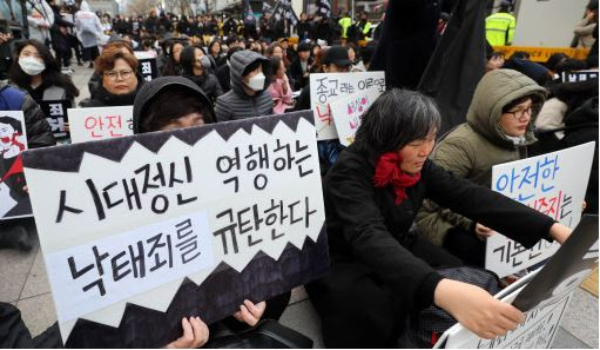 On 30 March, women’s rights activists took to the streets in central Seoul calling for the decriminalisation of abortion, a step that is necessary to protect women’s health and reproductive rights. The Constitutional Court is expected to rule this month on whether to uphold the restrictive law or rule that it is unconstitutional. The current law, from 1953, called the Mother and Child Health Law, says abortion is legal when the woman’s health is at risk or in cases of rape, incest or severe hereditary disorders. The woman must have the approval of the child’s father, even in cases of rape or incest, and must prove she has been raped All abortions, without exception, are illegal after the 24th week.

An estimated 50,000 abortions took place in Korea in 2017, a drop from an estimated 168,738 in 2010. Experts attribute the decline to the increased availability of morning-after pills and better awareness of birth control. But more and more women are also buying medical abortion pills online, according to Kim Jae-yean, an obstetrician and director of legislation with the Korean Association of Obstetricians and Gynecologists.

A recent survey of 10,000 women aged 15-44 conducted by the Korea Institute for Health and Social Affairs showed 75% of Korean women believe the abortion law should be amended because it is unfair to punish only women and because it violates women’s health rights. Of the 756 women who said they had had at least one abortion, 33.4% said they had done so to be able to continue their careers or their studies, 32.9% cited economic difficulties and 32.9% cited family planning.

Cho Kuk, senior presidential secretary for civil affairs said, “The current law only holds women accountable, excluding men who are also responsible. The abortion discussion should encompass women’s rights to life and health.” The Gender Ministry supports the scrapping of the abortion ban. Earlier this month, the National Human Rights Commission of Korea stated its opposition to the abortion ban for the first time.

At least 6 of the 8 Constitutional Court justices must agree that the law is unconstitutional. The case they will be ruling on was brought in 2017 by an obstetrician-gynaecologist who was charged for providing 69 abortions between November 2013 and July 2015. Expectations are rising. Chief Justice Yoo Nam-seok and two other justices have said the abortion ban should be overturned. Two others have not made their positions public, but in general they are considered to hold liberal views.