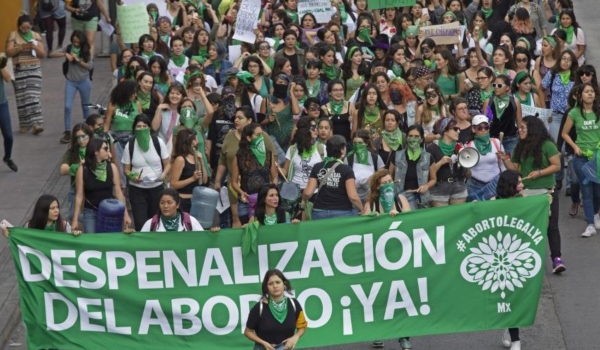 A few days after thousands of women took to the streets of Mexico City to demand the decriminalisation of abortion on International Safe Abortion Day, the party PRD put the issue on the table of the Mexica Congress. Senator Leonor Noyola, with support from her caucus, presented a bill that seeks to add three new paragraphs to Article 1 of the Mexican Constitution. Article 1 currently recognises the human rights of all Mexicans and the obligation of the State to protect them. These new rights would be:

What does the law on abortion say now?

The Federal Criminal Code provides a penalty of 6 months to 1 year in prison for women who have or seek an abortion, in accordance with Article 333. At the state level, the penal codes include penalties ranging from 15 days to 6 years in prison, as well as medical and psychological “treatment” or community work. Only Mexico City allows women to access legal abortion on request up to 12 weeks.

Senator Noyola’s proposal also received support from senators from two leftist parties: Morena, the party of the new president, who will take office on 1 December, and the smaller MC [Citizen’s Movement], who decided to join the initiative. In the current legislature, this is the first initiative to date that touches on these issues.

Other initiatives (based on media reports)

In the Chamber of Deputies, Beatriz Rojas and her caucus colleagues, also from Morena, announced on 22 October that they would also present a bill to promote the decriminalisation of abortion nationwide. Also on 22 October, Silvia Lorena Villavicencio Ayala, also a Morena Deputy, announced she would table a bill the next day on behalf of the Morena Women’s Caucus, to reform the Federal Criminal Code and the General Law of Women’s Access to a Life Free of Violence, which would extend legal abortion to all Mexican states, as has been the law in Mexico City since 2007. She said that the purpose was to prioritise women’s health and standardise the law across the country to allow legal abortion, regardless of the reason why a woman decides to have an abortion.

From the government-in-waiting, Olga Sánchez Cordero, who has been proposed as Secretary of the Interior, had already announced her support in August 2018 for decriminalising abortion under the new government.