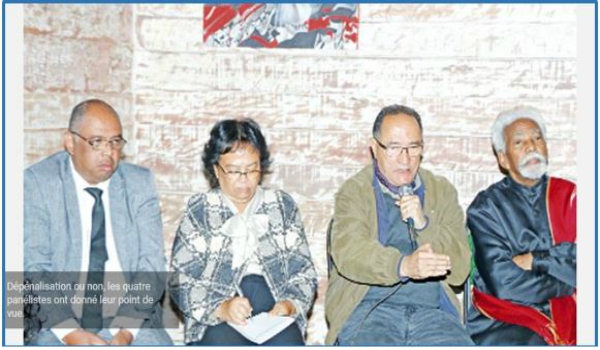 In Madagascar, abortion is a crime, punishable by the Penal Code, which has been in place since the colonial period, stemming from the Napoleonic Code of 1810. In December 2017, there was an attempt in Parliament, to decriminalise therapeutic abortion. In vain. But as the presidential election approaches, the association which fights for the legalisation of abortion called Nifin’Akanga, named after an abortifacient plant widely used in Madagascar to induce abortion, has revived the debate. The group hopes to encourage the candidates to take a stand on this social issue.

Abortion in Madagascar is a taboo subject, they say. But it’s more than that, it’s a lot of hypocrisy around a major topic of public health, says one of the participants in the debate. A sensitive issue, and difficult to quantify.

“Quite often, there are women who come to see us, but … uh, since we do not practise [abortion], we propose something else,” explains Dr Eric Andrianasolo, president of the National Association of Physicians, hesitantly. He cannot say what they propose to the women in question, because: “It’s very complicated to talk about it freely, even today. It’s a taboo subject and for doctors, well, we cannot take the risk of talking about it or practising it, because we risk going to jail.”

The weight of the Church
For Mireille Rabenoro, president of the Independent National Human Rights Commission, the decriminalisation of abortion is above all an electoral problem: “Politicians must be careful; they are afraid of losing the support of part of their electorate, especially influential voices like those of the Church. They prefer to stick to the status quo, so that they do not risk anything at all.”
In Madagascar, abortions are all clandestine and involve, if not death, often irreparable complications for women. No one knows how many abortions take place. This debate is the third one to take place, and the participants welcome the proposal that the law on family planning passed at the end of 2017 should be reformed to allow girls and women who want to have an abortion to do so, and those who do not, should not. “A woman is responsible for her own body, and should be able to do with it what she wants,” said a member of the audience, at the Maison Laborde Andohalo on the Saturday.

The subject of decriminalisation led to a lively debate. In addition to Mireille Rabenoro and Eric Andreanasolo, the panel consisted of Roger Kolo, a doctor, and General Désiré Ramakavelo, a writer. Although the four had different views on the subject, overall they supported the rights of the woman. However, General Désiré Ramakavelo thought that where possible a baby should be saved if possible, as well as the woman, and must not be thrown away into a bin or a toilet. Some members of the audience criticised this remark, and called for a public consultation before any law is drafted.

For now, the provision of safe abortion remains unavailable in Madagascar, and the means to provide it as well. Before that can change, said Eric Andreanasolo, the therapeutic grounds for abortion, the number of weeks of pregnancy, who should decide which grounds are legal, and where abortion should be provided all need to be discussed and agreed. Mireille Rabenoro insisted that the law must be reformed, and in spite of any complications a pregnant woman may suffer, the decision must always rest with her.