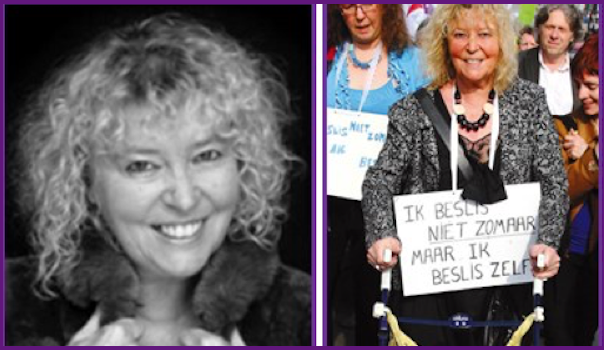 Lucie Van Crombrugge was born in November 1944, the youngest of three children. She grew up happily and as a young girl attended a strict Catholic school. At university, she took a degree in history.

She married an engineer and the couple moved to the Democratic Republic of Congo for several years, where she had two daughters. Lucie looked after the household and the children there and continued to do so after their return to Belgium, as a conscious choice at the time to be a full-time mother. Soon a third child came. She became adept at anti-authoritarian parenting, as a very caring and loving mother who, in a democratic way, let her children decide what they wanted.

It was in 1976 that Lucie came across the feminist slogan “The hand that rocks the cradle will not change the world”. Struck by the truth of this slogan, she became active in feminist groups fighting for women’s rights, including those fighting for the right to abortion.

She joined the Vrouwen Overleg Komitee (Women’s Policy Committee) of the feminist group Dolle Mina (Mad Mina) in Ghent. In the early 1980s, activists from the Kollektief Anticonceptie (Contraception Collective), who had secretly been doing illegal abortions in a private house in Ghent since 1980, asked her to get involved. At the time, abortion was not legal in Belgium. Lucie agreed to join them and counselled women who needed an abortion, and remained with them until 2009.

Throughout those years, she never stopped putting the legalization of abortion on the political agenda. It was a long and hard road, with many obstacles, but in 1990 the Belgian government finally passed a law that legalized abortion under certain circumstances. However, the then King of Belgium, Boudewijn, was not willing to give royal consent to the law, as it was against his conscience. As a perfect example of the Belgian belief in compromise, the government allowed the King to step down from his position for three days, to allow the law to become official. Lucie and all those involved were delighted with this outcome, especially with the big fuss about the role of the King, as it also provided a great form of promotion for their case and for the new law. Lucie said:

The secret clinic in Ghent became the Kollecktief Contraceptie – Abortuscentrum Gent, a bona fide abortion clinic, after the law changed, and Lucie became its Coordinator from 1996 to 2009. But the fight was not yet over. The next step was to work on an agreement with the government about reimbursement of the cost of abortion. Lucie was an important negotiator in this, and she was not willing to accept a lot of compromises. In 2001 the agreement was signed; not only was abortion reimbursed for women domiciled in Belgium, but their privacy was also guaranteed – for adult women as well as for minors living with their parents. The law itself did not exclude minors, she argued, so special regulations for them were not desirable or necessary either.

Lucie also played an important role at the international level. To learn more about abortion and pro-choice activism, she participated in several international conferences. At the 1996 ‘Abortion Matters’ conference in Amsterdam, Lucie called for the establishment of an organization for abortion professionals along with some French and Dutch colleagues. The following year, in 1997, at the Broussais Clinic in Paris, FIAPAC (International Federation of Professional Abortion and Contraception Associates) was born, with Lucie as one of the co-founders. Democracy and small scale were key words in those early days. FIAPAC’s aim was to bring together professionals of all disciplines: nurses, midwives, counsellors, advocates, doctors and legal experts at conferences, where they could learn from and with each other. Today FIAPAC has hundreds of members. At the 2016 conference in Lisbon, there were some 600 participants. Lucie was there, as happy as she was amazed to see how big her ‘child’ had grown.

In 2009, Lucie retired as the head of the clinic in Ghent, but not from activism. Shortly after her retirement, anti-choice activists began to demonstrate in front of the Ghent clinic. Lucie showed up several times as a pro-choice activist and escorted women to the clinic entrance. She also kept fighting for the decriminalisation of abortion in Belgium and said she would continue fighting until abortion was out of the criminal law.

In May 2015, together with the late Dr Willy Peers, Lucie received the great honour of a Doctor Honoris Causa at the Vrije Universiteit Brussel, for their shared commitment to the fight for the right to abortion. At the academic ceremony, the public gave her a long and loud standing ovation, which is very unusual at such a ceremony.

The last time I saw Lucie was in March 2017, when she participated in a panel discussion in Brussels on Ann Furedi’s book, The Moral Case for Abortion. She didn’t feel at all well. Soon afterwards, she received the diagnosis of a fatal condition. She decided promptly on physician-assisted dying. And that is how we will remember Lucie: warm-hearted, straightforward and following her beliefs without compromise.