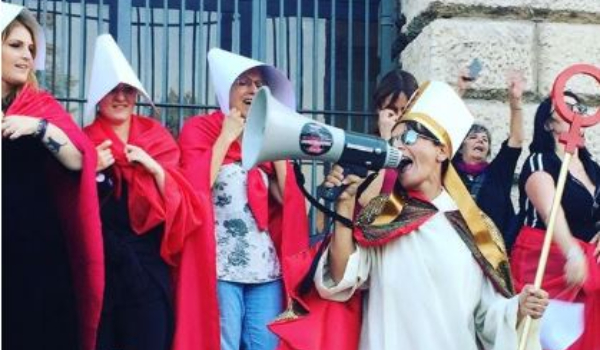 The Italian feminist movement is mobilising to oppose the government coalition on the subject of abortion. The first protests took place in Verona in October, after the city adopted a motion to finance anti-abortion organisations and make it a so-called pro-life city by preventing abortions. Then a demonstration took place in Rome to denounce repeated attacks on women’s rights. An extreme right party, the League, is in power, in coalition with the 5 Stars Movement. They are targeting in particular the right to abortion in cities where access to services is scarce or non-existent.

During the City Council meeting, activists of “Non una di meno”, the most active Italian feminist association, emerged dressed as nuns … and last month they were demonstrating in the streets of the city, led by Laura Sebastio.

Verona has for years been a laboratory for the development of right-wing politics, combined with Catholic fundamentalism. What had been local up to now has more recently been extended to the national level. It is absolutely no coincidence that the current Minister of the Family is Lorenzo Fontana, former mayor – deputy of Verona, a well-known Catholic fundamentalist and member of the anti-abortion movement.

Livia became pregnant at the age 18 years. She entered an obstacle course and only just managed to have an abortion just in time. She reported: “I first went to a free medical center near my home. There, a psychologist greeted me and insisted on knowing if I wanted to keep the baby, if it was with my parents’ approval, but they did not allow me to see a doctor. I changed to another centre where I was able to talk to a gynaecologist, but there I was put on a waiting list. I pushed and finally I could have an abortion but it was only just before the legal limit of 12 weeks of pregnancy. It was terrible.”

The main obstacle to accessing abortion is the conscientious objection of more than 70% of Italian doctors. It is also important to mention, reports the Association of Eleonora Milazzi – Objection Rejected, the pharmacists who refuse to sell emergency contraception. Hence, the Association got the idea of establishing an online map of health clinics and services to avoid and those it is safe to go to.

In Calabria, a woman has reported that the hospital near her home has no gynaecology services at all! She had been all around Calabria, to no avail. She was beyond the 12-week time limit, and she could not have an abortion. It is a very common problem throughout the country. In the South, there is a problem of access to any health facilities in general. In the North, anti-abortion movements are very present in reception centres and many of these centres are also private. Given this situation, the map idea has become a very necessary instrument.

To defend access to abortion but also to denounce a bill brought by the League reforming the family law, the Italians called to protest on 24 November in Rome. While in Verona, on the same day, the anti-abortion movement would march too.