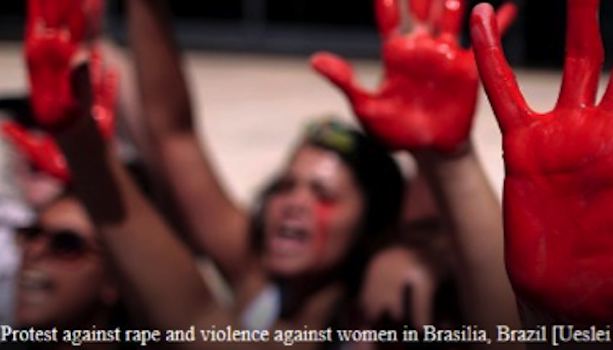 A 16-year-old Brazilian girl reported she had been raped by more than 30 men around 21 May. A video of the rape was posted on Twitter several days later by an alleged perpetrator, which set off a wave of outrage in the country. The video showed the girl nude, bleeding and semi-conscious with several men insulting her and laughing, and even showing their faces. One was heard to say: “More than 30 impregnated her!” Before the Twitter account could be suspended and the video removed, 500 people had already liked it. The crime took place a day after another rape of a 17-year-old girl by five men in the state of Piauí in the Northeast of Brazil.

In response, people marched in several cities to demand justice and decry sexism in Brazilian culture. Supreme Court Justice Carmen Lucia said: “Each and every woman is a victim. Our bodies are tormented, our souls are trashed… These criminals must quickly be held accountable”.

The original lead investigator was removed from the case at the request of the girl’s solicitor, because in an interview he had asked the girl if she had participated in group sex parties. A policewoman has been appointed in his place who called a news conference and launched a massive search for the men in the neighbourhood where the rape took place.

The cases sparkled intense debate on social media platforms about the rape culture, macho behaviour, the naturalisation of violence against women within male peer groups, and talking to children about consent. However, there have also been comments on social media blaming the girl herself, including death threats.