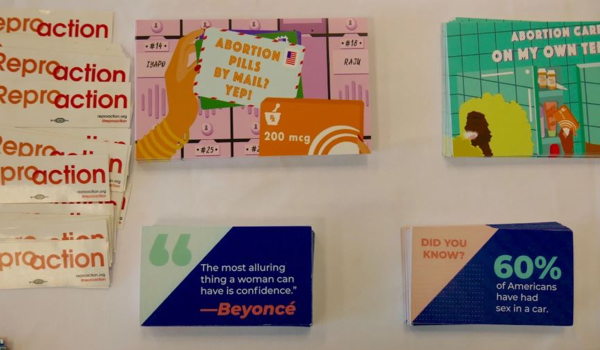 US activists teaching women how to have abortions at home

In a conference room in a library, just past a room where a Bible study was wrapping up, a group of people gathered to learn how to have an abortion at home. “So long as we have a safe option that can be accomplished outside of a clinical or medical setting, there’s no reason that shouldn’t also be available.”

Nine states passed abortion bans last year; the courts have not allowed any to take effect

Of 17 states that enacted restrictions in 2019, according to the Guttmacher Institute, nine enacted particularly severe laws that narrowly limit the window of time in which a woman can get an abortion, in some cases effectively banning the procedure altogether. These particular laws have sparked widespread outrage and panic among abortion advocates, in many cases prohibiting abortion before many women even know they are pregnant.

No, we won’t be ‘celebrating’ the anniversary of ‘Roe’

This week, reproductive rights organizations across the nation host[ed] marches, rallies, fundraisers, and media events to commemorate the 47th anniversary of Roe v. Wade, the 1973 U.S. Supreme Court decision that struck down statewide bans on abortion. But my colleagues at the Yellowhammer Fund and I won’t be “celebrating” Roe in Alabama. We are done celebrating a ruling and a movement that, while radically breaking down barriers for white women of moderate means to access safe abortion services, systematically left behind those without economic resources – especially communities of color and people in poverty.

Mr. “Grab ’em by the pussy” spouts off about “the majesty of God’s creation” at US anti-abortion rally

“Donald Trump’s speechwriters really pulled out all the rhetorical flourishes for his remarks at the March for Life in Washington, D.C., on Friday. Mr. “Grab ‘em by the pussy” was spouting line after line about “the majesty of God’s creation” and “the splendor that radiates from each human soul” and “all of the blessings that will come from the beauty, talent, purpose, nobility, and grace of every American child.”

[Editor’s Note: This headline and text are a quote.]