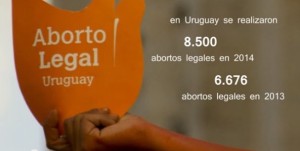 Uruguay is one of the few countries that has made progress during the past few years through the passing of the Law No.18.987 of Voluntary Termination of Pregnancy and Law No.18.426 of the Right to Sexual and Reproductive Health. These changes have enabled legal abortions to take place within the framework of care for sexual and reproductive health, despite the fact that abortion remains a crime under the Penal Code. Up until 12 weeks of pregnancy and 14 weeks in the case of rape, natural and legal citizens of Uruguay and women with at least one year’s residency can be attended free of charge in all the health system’s institutions. However, despite being an advanced country in the region, the current situation still requires efforts to improve on what has already been achieved. In 2013, anti-rights groups tried to repeal the Voluntary Termination of Pregnancy Law. Although they failed, they still attempt to hinder the implementation of abortion services… They cannot accept that as women we have the right to make decisions about our bodies and our lives and that we are ethical subjects capable of making autonomous decisions.

In Uruguay, it took us 30 years of social mobilization to progress in the recognition of sexual and reproductive rights as human rights. We are still far from reaching the end of the road:

• Abortion is still considered a crime in the Penal Code, meaning that the practice and those who undergo it are stigmatized.
• The abuse of the recourse to conscientious objection by a high percentage of gynecologists, in addition to being unexplainable in a secular state, has become one of the main obstacles in access to abortion services.
• The women who live in places with 100% conscientious objection are required to travel many kilometers in order to be prescribed the medication which they will later use to abort in their home.
• The women who live in conditions of greater vulnerability are, in many cases and for multiple reasons, expelled from the health system, exposing them once more to the risks of a backstreet abortion.
• The moral sanction based on beliefs and atavistic prejudices supported by the idea of maternity as unquestioned destiny is preserved in the most conservative and patriarchal views of political, religious and medical powers.
• There have been deaths which should have been avoided and women imprisoned for having undergone abortion outside of the margins imposed by the country’s abortion law.

In light of this, this 28 September we once more unite our voice to those of our allied organizations in the region and the world to continue fighting for our rights. Because deciding makes us free, we resoundingly reaffirm that access to legal, free and safe abortion is a matter of rights; it is a matter of democracy.