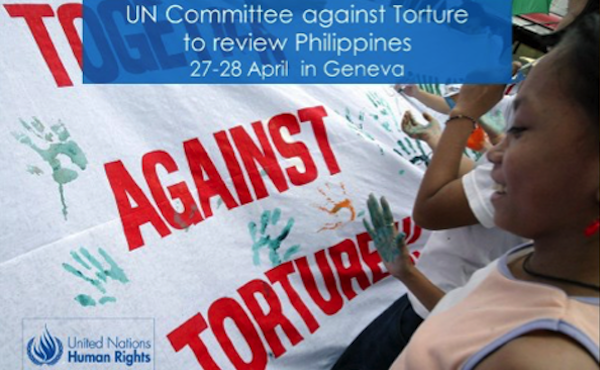 The CAT also expressed deep concerns over the widespread mistreatment of women seeking post-abortion care in the Philippines and urged the Philippine government to consider legalising abortion in a number of circumstances, and develop a confidential complaints mechanism for women subjected to discrimination, harassment or ill-treatment while seeking post-abortion or post-pregnancy treatment, and to investigate, prevent and punish all incidences of abuse towards these women.

The committee specifically noted that the ban on contraceptives imposed under Executive Orders 003 and 030 in Manila City “caused damage to women’s mental and physical health.” They also recognized that the lack of access to emergency contraceptives for survivors of sexual assault can amount to torture or ill-treatment, and called for immediate steps to reinstate its availability.

The Responsible Parenthood and Reproductive Health Act 2012, passed after years of advocacy and negotiation of its terms nationally, guaranteed universal and free access to nearly all modern contraceptives and women’s right to humane, compassionate and non-judgmental post-abortion care, yet it is far from being fully implemented.

The Center for Reproductive Rights (CRR) and the International Women’s Human Rights Clinic at the City University of New York School of Law submitted a letter to the Committee’s review. A second letter, submitted by the Philippine Safe Abortion Advocacy Network (PINSAN) and CRR, reported the following:

“Regressive amendments to the country’s penal code submitted to Congress by the Department of Justice in August 2014 (a) maintain the complete criminal ban on abortion and (b) increase the term of imprisonment and add the imposition of a fine for those involved in the performance of abortion, such that: (i) for a person who performs an abortion with the consent of the woman, the term of imprisonment is increased from six years to up to twelve years and fined up to an equivalent of fifty times his or her average daily income; and (ii) for a woman who obtains or herself performs an abortion, the term of imprisonment is up to six years and fined up to an equivalent of twenty times her average daily income. Since the submission of the pre-session letter, local media continue to report arrests of women seeking abortions and those assisting them.

“Eight out of 10 women who induce an abortion suffer complications. As noted in the pre-session letter, the state party guarantees women’s right to post-abortion care under the Department of Health (DOH) policy on “Prevention and Management of Abortion and Its Complications” (PMAC); this was further strengthened by the Magna Carta of Women (MCW) and RPRHA, which promote women’s right to humane, non-judgmental and compassionate post-abortion care. However, for decades, these laws and policy have not been effectively implemented by the state party resulting in serious human rights violations for women seeking treatment for abortion complications in both public and private health care facilities. In 2015, after being formally notified of the rampant violations and provided with evidence of the same, the Philippine Commission on Women raised the issue with the Department of Health, which is now developing a new policy on post-abortion care. The current status of post-abortion care underscores the need for the state party to urgently take effective steps to prevent and address violations of rights and ensure the adoption and implementation of a policy which ensures access to timely, humane, non-judgmental, and compassionate post-abortion care without fear of criminal penalties or reprisals.

“As highlighted in the pre-session letter and in testimonies gathered after its submission, women are routinely abused, harassed, threatened, and either receive delayed treatment or out rightly denied of health services when seeking post-abortion care. It is estimated that 1 in 3 women with complications do not receive post abortion care; stigma surrounding abortion and “shame” (i.e. some women have reported feeling shamed and intimidated by health care workers) are cited as common barriers to accessing appropriate medical treatment. The state party has continued to fail to prevent coercive interrogations of women seeking post-abortion care. Testimonies gathered in 2014 demonstrate that the practice among health care professionals of coercing information from women as a condition for receiving medical care is still prevalent.

“In a 2014 focus group discussion organized by CRR and a local partner, a woman shared that she was verbally abused and reported to law enforcement authorities by a doctor after admitting inducing an abortion. As she underwent an internal examination, police officers entered the room, took photos, and questioned her. To make matters worse, she was only able to receive the dilation and curettage procedure essential for her treatment almost 24 hours after admission and then was turned over to the custody of law enforcement authorities when ready for discharge. The entire experience in the hospital and in detention left her deeply traumatized.”

This letter also noted that the manufacture, importation, sale or distribution of misoprostol has been prohibited since 2002 because it can be used as an abortifacient.

Concluding observations of the Committee against Torture: