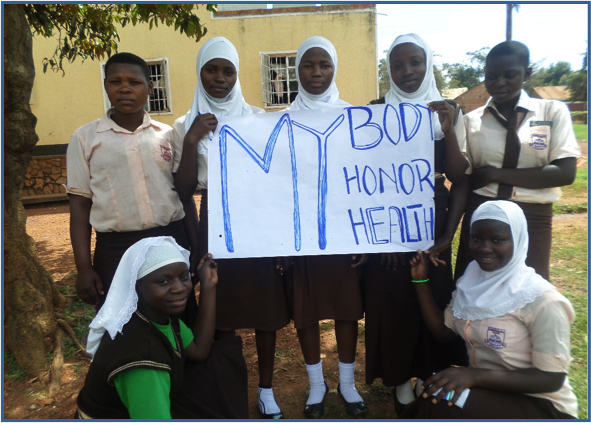 Let’s talk about it: “Breaking the silence on abortion stigma among school-going young people”

Marking International Safe Abortion Day, COHERINET held a discussion with 250 young people, five teachers and representatives from the Network’s secretariat in the suburbs of Wakiso district.

Opening the discussion about abortion was not easy as even the teachers felt shy to talk about issues of abortion in the presence of the students. However, we later realized that this was due to the restrictive policies in the schools and the compounding factors of stigma, discrimination and controversy over abortion rights.

Students gave testimonies of unsafe abortions from their friends that had led to two deaths. The teachers and students informed us that unsafe abortions are increasing year after year with serious consequences, which are not reported due to fear of imprisonment.

“We are very much concerned about the increasing number of unsafe abortions performed in different localities and schools which we can’t talk about openly due fear of losing our schools and jobs, we hope you understand why,” one of the teachers told us.

Jacqueline, a senior five student, testified that her deceased friend Joan tried to abort using Omo mixed with tea leaves after her stepmother realized that she was pregnant and sent her away from home. She told us that Joan “used to spend the whole day loitering in town looking for something to eat and at night would sneak back to the goats’ pen to sleep”. After three weeks; she was found dead in the morning with lots blood around.

“Unless the Ugandan government adopts a codified law concerning access to safe and legal abortion, many young people will continue dying as many of them begin having sex but have never had sex education, which is leading to unwanted pregnancies,” explained Nakate Joseline (school senior woman). Monthly pregnancy check-ups by schools are avoided by many students due to fear as anyone found pregnant is always sent home.

We should join hands to combat the silent killer unsafe abortion.