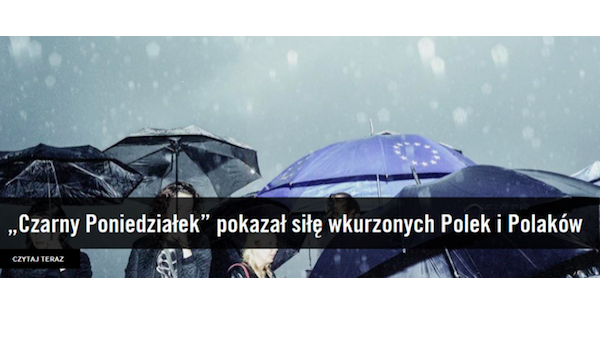 Our congratulations to the women of Poland for the brilliant decision to call a national strike on 3 October, in which between 30,000 and 100,000 people, according to different reports, took to the streets to protest the threatened ban on abortion: the government couldn’t ignore you any longer.

According to Maritime First News, state-run radio in Poland reported that on 4 October Prime Minister Beata Szydlo had distanced the government from the bill because of the strike. They quoted her as saying at a news conference : “I want to state very clearly that the PiS [Law and Justice] government is not working on any legislation changing the rules on abortion in Poland.”

Polish Vice Minister, Jarosław Gowin, a devout Catholic, was also quoted by the BBC as saying on 4 October that the nationwide protest on Monday had given the government “food for thought”. He was also reported as saying that he wanted to calm those afraid that abortion could be completely banned in Poland. However, this is how his statement was reported in English: “Abortion will certainly not be banned when the woman is the victim of rape or if her life or health is in danger” and that the protests around the country had “taught [the government] humility”.

He did not mention what would happen with abortion on grounds of fetal abnormality. Whether that was a significant omission is unclear.

On 5 October in the evening, the committee selected by the Polish lower house of parliament to review the bill voted to reject it. On 6 October, the full lower house of parliament was set to vote on whether to push the bill back to the committee, or drop it completely. This was set to take place just before the European Parliament was due to hold a debate on Polish women’s human rights

Barbara Nowacka, an opposition politician who has been active in the “Black Protest” movement to stop further restrictions on abortion in Poland, asked on Twitter: “Wonder what will happen during the vote in Parliament. Did #BlackProtest scare them or is it just a trick before the European Parliament debate?”

What happened was a decision to reject the bill completely. In the most recent news reports in English, which had stopped by the end of the day on 6 October, the BBC reported that the lower house of the parliament had indeed voted the Stop Abortion bill down by a large majority – 352 to 58. In their report after the vote, the Guardian quotes Jarosław Kaczyński, leader of PiS party, as saying to the parliament: “PiS continues to back the protection of life. And it will continue to take action in this respect, but it will be considered action.”

An excellent commentary in response to all these events by Krystyna Kacpura, Executive Director of the Polish Federation of Women & Family Planning, was also published in the Guardian on 6 October, where she said: “This victory on abortion has empowered Polish women – we’ll never be the same.”

Here is a brilliant set of photographs and quotes of women who went on strike on Monday, 3 October 2016.

Photos by Karol Grygoruk, 4 October 2016 in Vice Poland article including the photo above