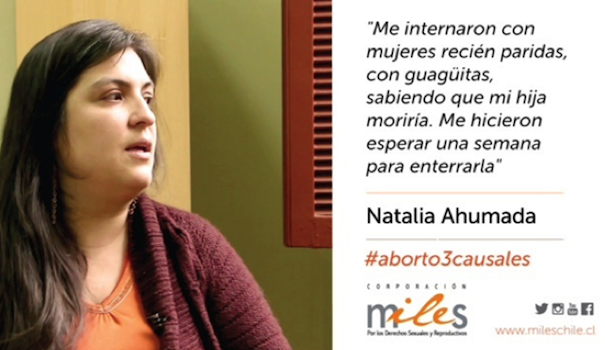 – Please sign the petition in support of the bill at: contacto@oge.cl

Following a vote today, 17 January, in the Constitutional Commission of the Chilean Senate, the fantastic news is: the abortion bill was approved by the Commission by a vote of three in favour and 2 against. It can now be taken to the floor of the full Senate.

In a last-minute effort in the week before the vote, Chilean human rights NGO Corporación Miles launched four videos. The videos contain raw accounts by women of their experiences of pregnancies with severe and fatal fetal anomalies. They have been disseminated through social networks one at a time, each time to thousands of people – last Wednesday and Thursday 11-12 January, Sunday 15 January and Monday 16 January, with a clear appeal to the Senators to vote for the decriminalisation of abortion on three grounds.

In the first video, Natalia Ahumada, aged 35 from Valparaiso, describes how her daughter was found to have skeletal dysplasia and died in the womb at 33 weeks of pregnancy. She says: “In the public hospital, I was told that my daughter had genetic mutations. I was treated for anxiety and depression. You can’t forget that you are a woman with a non-viable pregnancy who is suffering. I was hospitalized alongside post-partum women with healthy newborns, who I had to share a room with until the delivery, knowing that my daughter was dead.” As if that were not enough, she says: “Because of the lack of information while I was in hospital, I had to wait another week to bury her.”

On the evening of 12 January, the testimony is from Rosita Fuica (23) from Los Angeles, who talks about her experience in a hospital that denounced her to the police for having suffered a miscarriage at home.

On 15 January, a video was circulated with the story of Andrea Quiroga (aged 40) in Santiago, who suffered a pregnancy with a fetus incompatible with life. And on 16 January, Paola Valenzuela (aged 42), talks about the drama of learning her pregnancy was affected by amniotic band syndrome when she was 36 weeks pregnant, and that the child in her womb was being mutilated as it developed because of a fatal problem with all its organs, which meant it would die.

“These are real stories, touching, daunting, about damage to the dignity of women in the extreme. We appreciate the courage of Natalia, Rosita, Andrea and Paola to publicise their testimonies to sensitise the parliamentarians. We hope that the bill will not only be voted on and approved by the Commission, but also in the Senate Chamber,” said the director of Miles, Claudia Dides, in a statement.