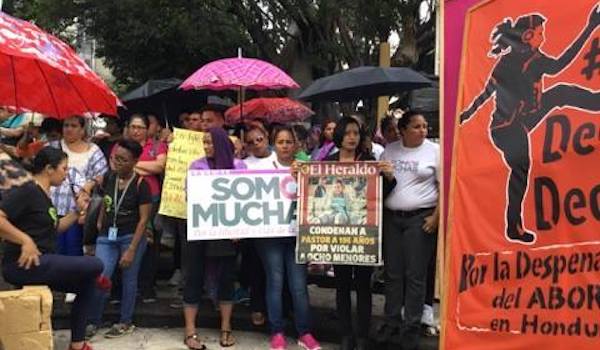 The above photograph was taken at a sit-in outside the National Congress on 4 May where anti-abortion demonstrators shouted and shook their fists, threw eggs and water at the sit-in and slashed their banners with knives.

For the past two years, Honduran lawmakers have been completely overhauling the country’s Penal Code for the first time in more than three decades. Every article of the Penal Code was being changed in some way except for the one on abortion, so there was hope that this would open the possibility of a revision of the ban on abortion too. For many months now, Somos Muchas, a coalition of groups in Honduras who support safe abortion, have campaigned for the Special Commission charged with revising the Penal Code to allow abortions on grounds of rape/incest, fatal fetal anomaly, and for health reasons.

Caballero Cabrera of the Center for Reproductive Rights told Vice that these efforts seemed to be paying off, as the lawmakers were leaning towards allowing abortion in medical emergencies. But then anti-abortion religious groups got involved.

On 17 April, an opinion poll on the three grounds for abortion was published. 65% supported allowing abortion if there is a risk to the life or health of the woman; 52% supported if the pregnancy was a result of rape; and 69% supported if the fetus had no possibility of life.

On 25 April, during a sit-in in front of the National Congress, groups opposed to the rights of women threw eggs and water at demonstrators and used knives to slash their banners. Radio America and Maya TV are examples of news media who carried interviews.

On 26 April, Vivian Rivera, President of the Association of Gynaecologists and Obstetricians, said: “Unfortunately, the churches in this country carry more weight than the scientific community.” Also on 26 April, Julieta Castellanos, Rector of the Autonomous University of Honduras said: “I believe that the State must listen to the mothers, must listen to the groups that protect women, and for this to stop being a subject addressed only by men in the Congress.”

On 4 May, 18 members of the European Parliament wrote to the President of the National Congress and the President and Members of the Commission, urging them to include the three grounds for abortion in the revised Code. In response to the violence at the sit-in, the group Ecumenicas por el Derecho a Decidir (Ecumenical Women for the Right to Decide) held a press conference calling on Christian men and women not to fill their hearts with the discourse of hatred. The Central American and Mexico Youth Fund also sent flowers to Somos Muchas in support of their hard work.

However, on 4 May, the special Commission declined to recommend any revision to the text on abortion.