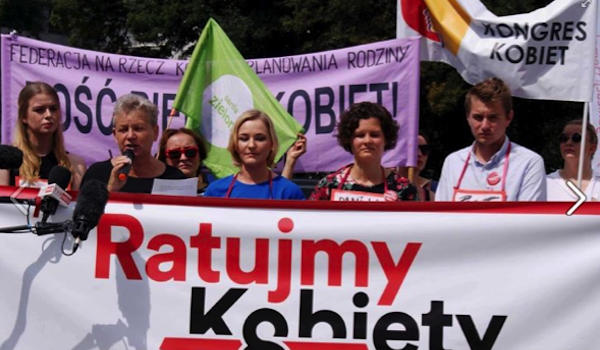 The “Save the Women” Civic Committee has tabled a draft law in the Sejm, lower house of the Polish parliament, liberalizing the anti-abortion legislation in force in Poland since 1993. The draft law allows abortion on request until the 12th week of pregnancy, and improves access to contraception and sexuality education, After that abortion would be permissible along the same rules as those in effect today. Additionally, in cases of severe and irreversible impairment of the foetus or an incurable disease, abortion would be permitted up to the 24th week. Abortion would be permissible up to the 18th week if the pregnancy is the result of rape or sexual abuse.

The Committee succeeded in collecting about 215,000 signatures endorsing the draft law from across Poland in three months. The Sejm, the lower chamber of Parliament, now has three months to initiate debate on the bill. It was made public at a press conference on 4 August.

According to official Health Ministry statistics, fewer than 1,000 abortions are performed in Poland every year. In 2014, the official number was 977. Poland’s NGOs believe that the number of abortions in Poland actually ranges from 80,000 to 190,000 annually.

“Save the Women” is a response to the extremely repressive anti-abortion bill aimed at banning abortion in Poland even if it is necessary to save the life of a woman, which was tabled in parliament by fundamentalist groups in July. This law may soon be adopted by Law and Justice (PiS), the radical, right-wing ruling party, who current have an absolute majority.

Nevertheless, the activists working for liberalization of the abortion law hope for a serious parliamentary debate, based on evidence and rational arguments, which demonstrates the serious negative consequences of anti-abortion laws for women’s lives and health.

Now, the Parliament will have to consider both bills in the autumn. It will then be seen whether, under the rule of PiS, women will regain some of their rights or lose what few rights still remain to them.